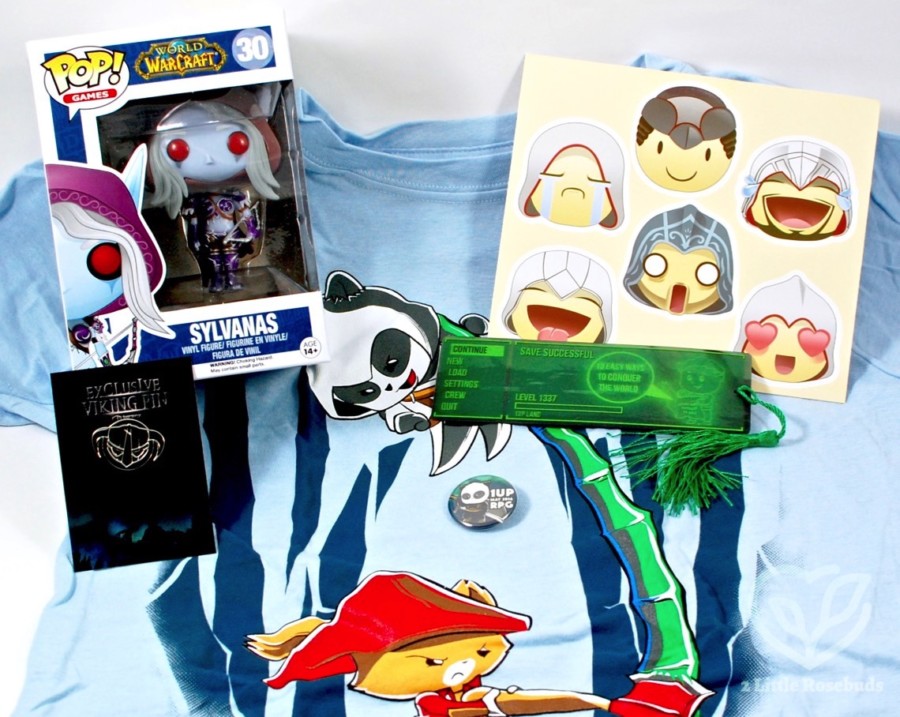 1Up Box is a subscription box that sends a selection of “epic gear” to geeks and gamers on a monthly basis.

Each box will contain 6 to 8 items, including an exclusively designed t-shirt. Items you may receive include toys, collectibles, gaming gear, figures, accessories, and more. Every box is guaranteed to have a total retail value of at least $40.

Subscriptions are $12.92/month (plus $7 shipping), or less with multi-month commitments. — For a limited time, you can save $3 on your first box with coupon code “AWESOME“! 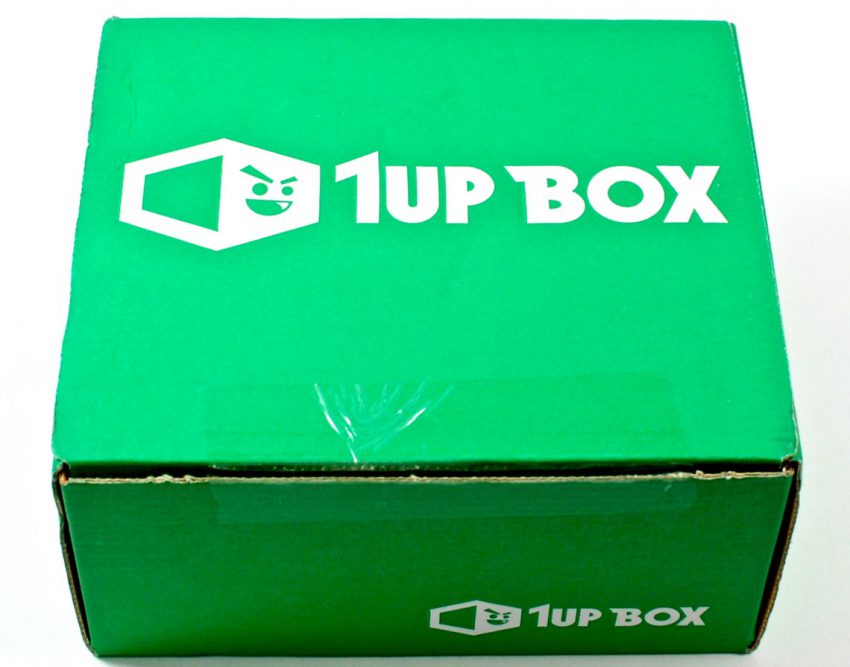 Everything was shipped in a bright green box with a white 1Up Box logo. (I just now realized that what I thought was a creepy vampire tooth in the box guy’s mouth is actually just his tongue… He still looks a bit sinister though… 😉 ) 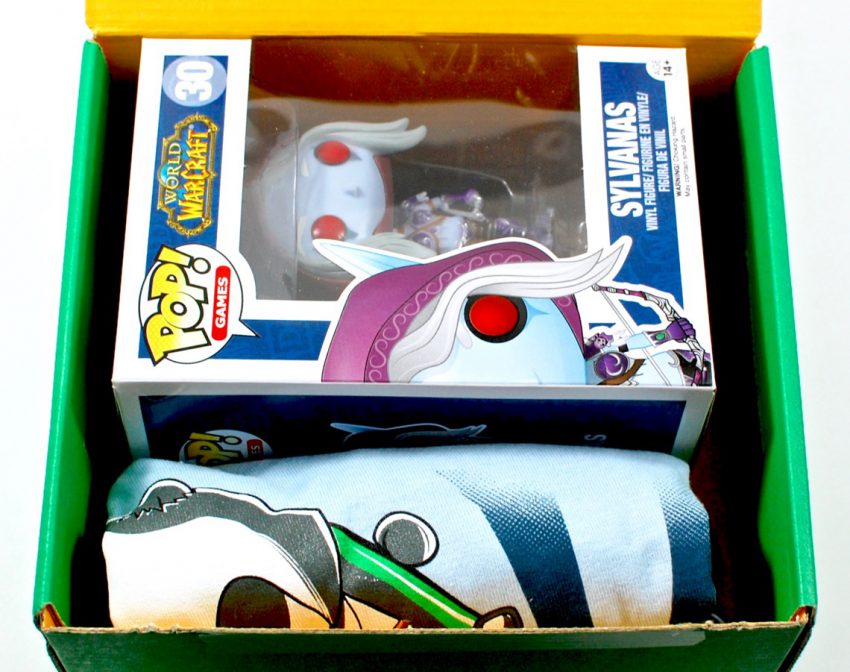 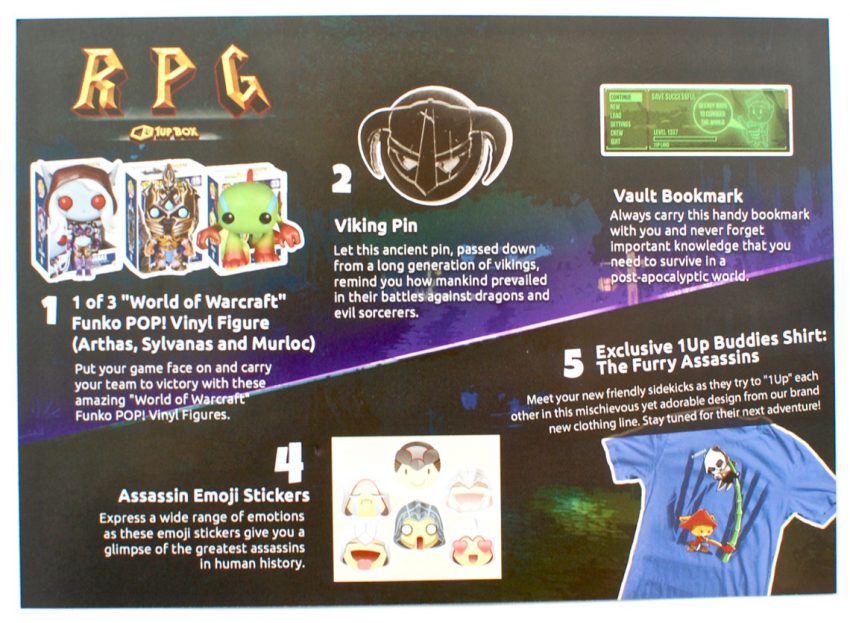 The theme for May’s 1Up box was “RPG” and the info card listed all of the items, along with photos and brief descriptions for each one.

World of Warcraft Sylvanas Funko POP! Vinyl Figure – Welp, I really don’t know anything about World of Warcraft, but I DO enjoy adding to my growing collection of Funko Pops. 😉 This little lady stands about 3 3/4 inches tall and features a pair of creepy bright red eyes. Hopefully she’ll play nice with my other Pops. Subscribers could have received Arthas, Sylvanas, or Murloc. 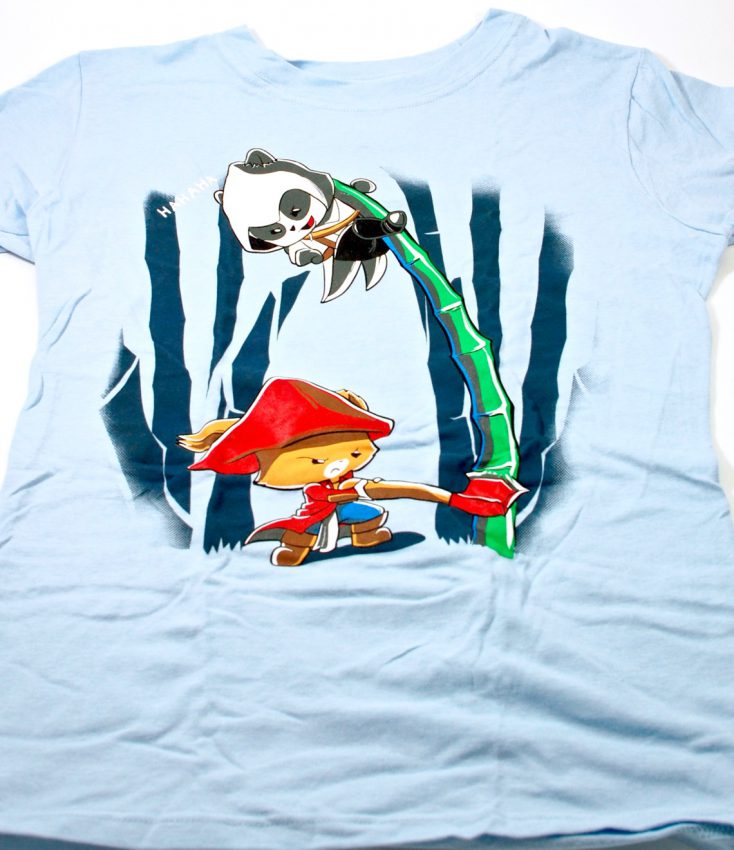 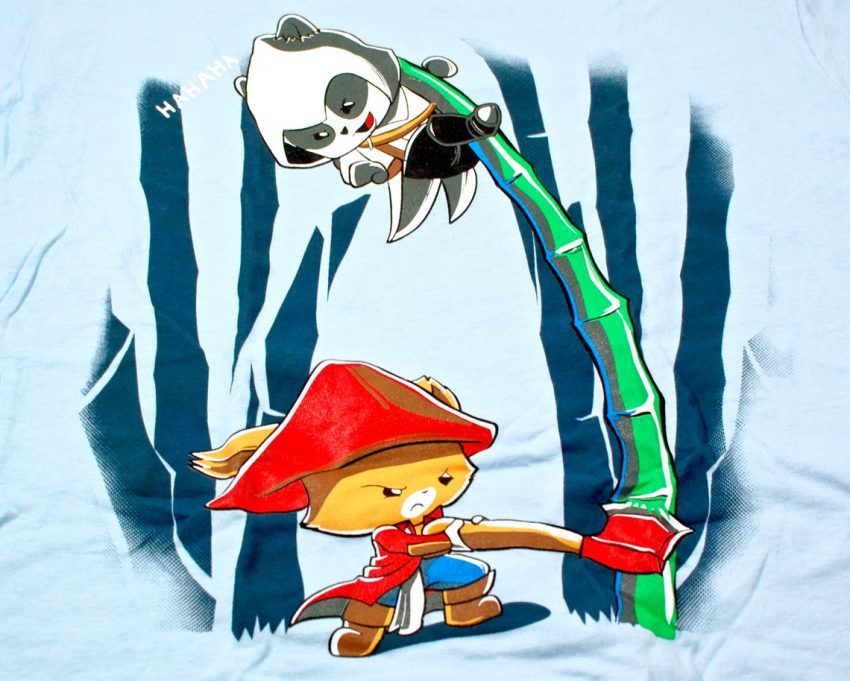 Exclusive 1Up Buddies Shirt: The Furry Assassins – 1Up Box has a brand new clothing line, which this exclusive t-shirt is a part of. The design features “your new friendly sidekicks as they try to ‘1Up’ each other”. My husband loves quirky t-shirts, so I can definitely see him wearing this. 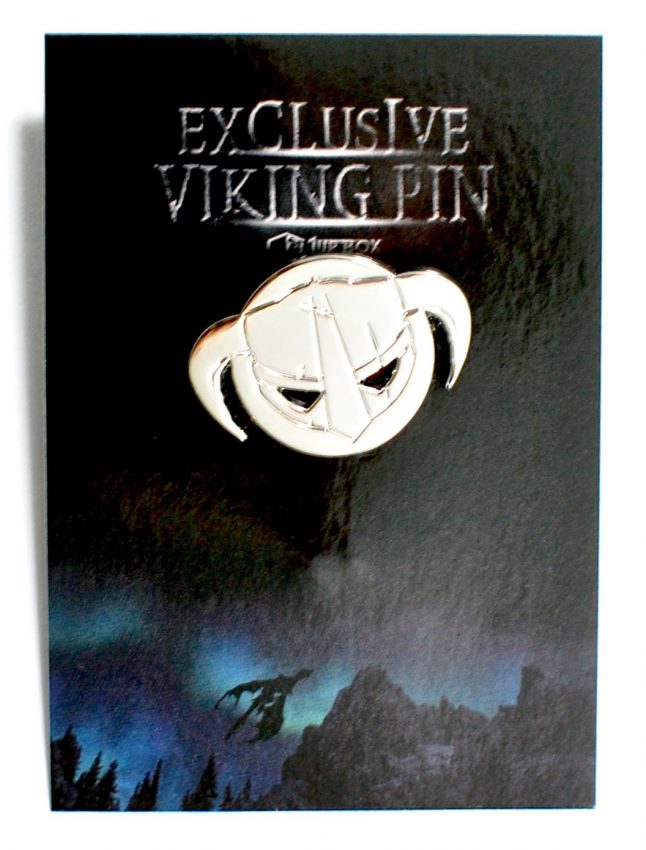 Exclusive Viking Pin – This shiny metal pin was included to serve as a reminder of how mankind prevailed in their battles against dragons and evil sorcerers. 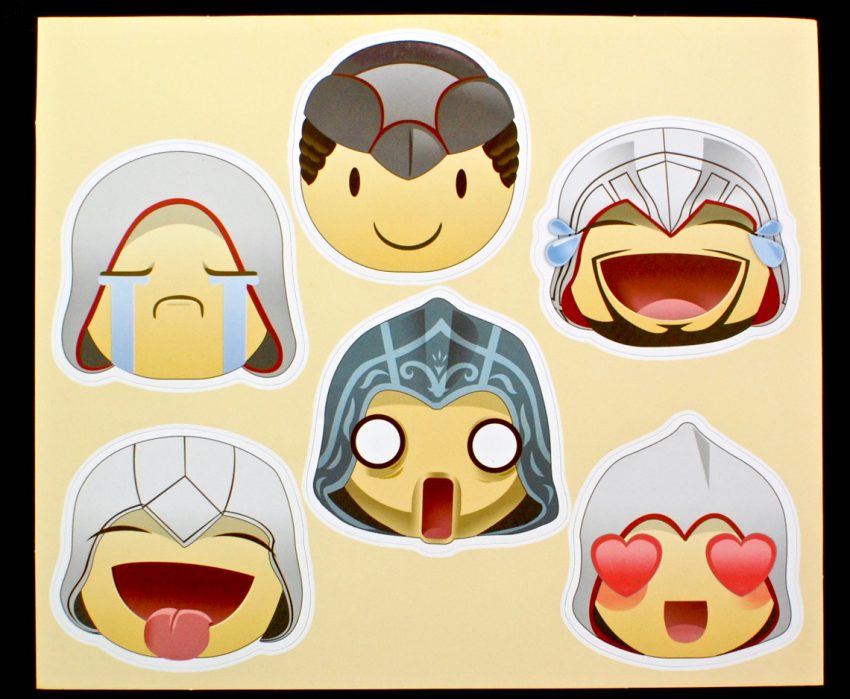 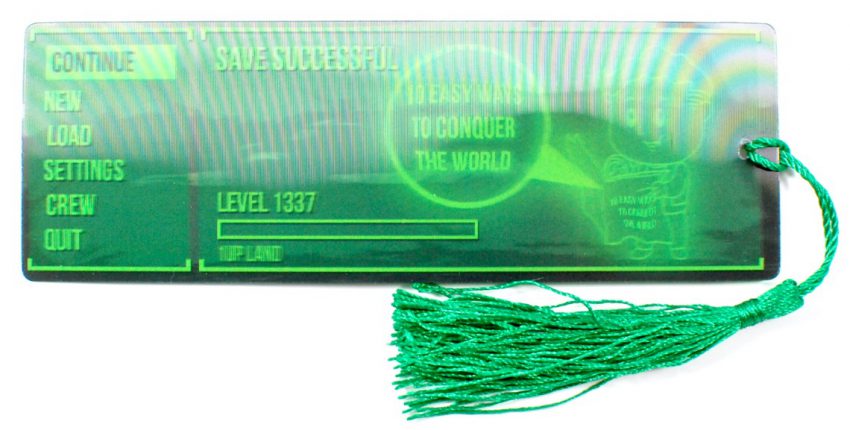 Vault Bookmark – I tried to get a photo that showed the hologram effect on this bookmark, but clearly I failed. 😉 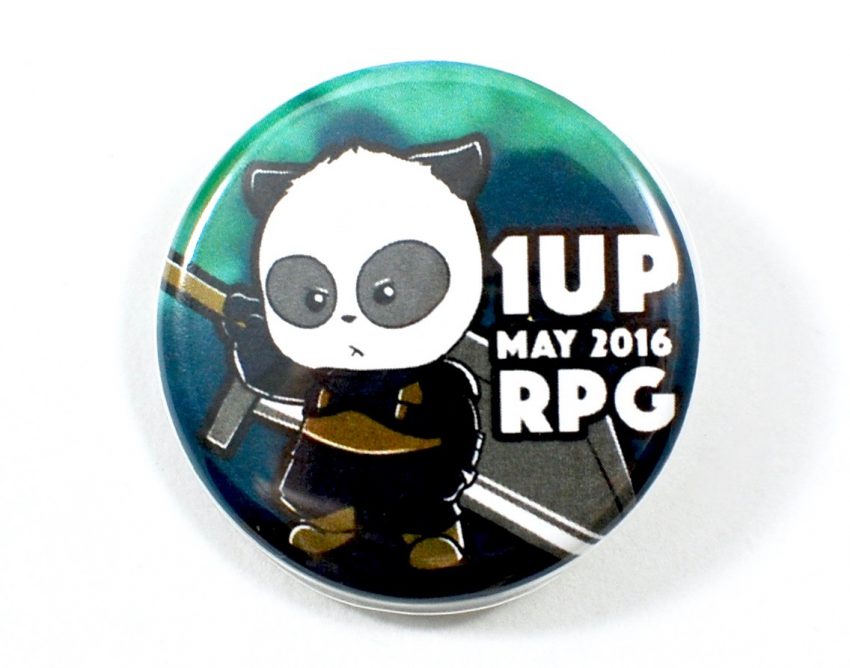 Pin – A cute little panda pin to commemorate the May 2016 RPG box.

While the whole “RPG” theme was a bit lost on me, I could nevertheless appreciate the curation that went into the May 1UP Box. Since there were so many exclusives, I didn’t do a cost breakdown… However, the Funko figure alone sells for over $10 on Amazon, so I’d say the value is definitely there. Plus, don’t forget you can save $3 on your first box with coupon code “AWESOME“!

A decent geek/gamer box with a nice amount of exclusive items. I would have liked to have seen one more “main” item instead of the filler-like stickers and bookmark, but other than that it was a pretty solid box.