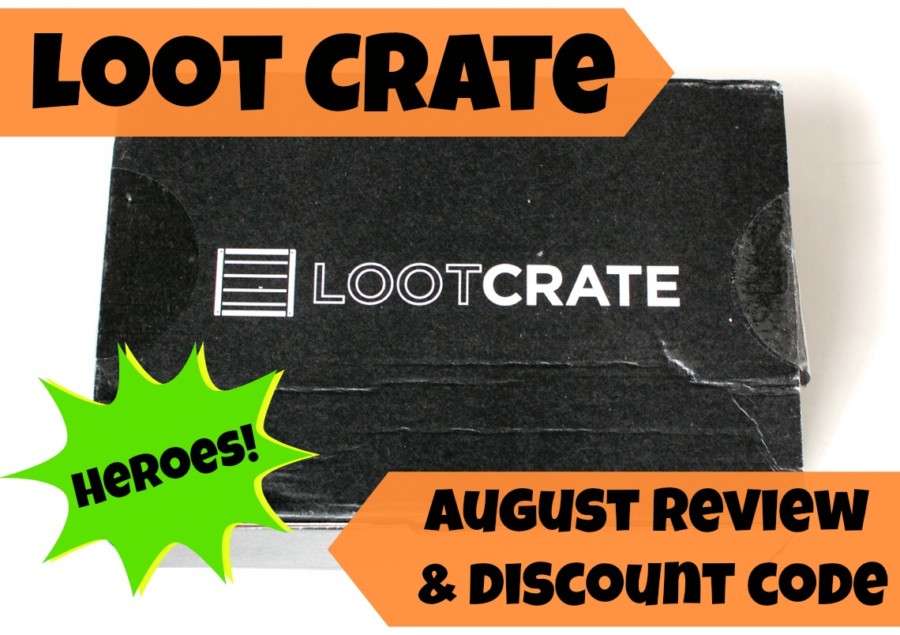 Loot Crate is a monthly subscription box for fans of gamer/geek culture.

Every month you’ll get a box with 6-8 items that can include toys, gear, snacks, hardware, art, accessories, and more! Boxes are $19.37/month (price includes shipping), or less with longer subscriptions.

Last month’s box had a “Villains” theme, so it’s only right that the August box would pay homage to the “Heroes”! I had already seen a few spoilers prior to receiving my box and they looked pretty awesome…

Let’s see what’s was inside!

With July’s altered box going over so well, they decided to do it again for August! I’m no TMNT expert (far from it), but I’m guessing this is a drawing of their sewer hangout. (The pizza box tipped me off.) I do recognize the good ol’ “up up down down left right left right B A start” thing. Ah, the early 90’s…

The Mini Mag – My husband likes to read these, but I’m just in it for the games. (There’s a “Can you spot the difference” game in this one. Oooh!)

Funko POP! Groot Exclusive – This is the item that everyone is going nuts over. I’ve never seen the movie, but my husband has so he briefly explained who this guy is. He’s pretty cute, so that’s enough of a win for me. This is a Loot Crate exclusive that can’t be found anywhere else. He has a glow-in-the-dark arm and green moss(?) on his body. The “regular” version doesn’t have these variations. I’ve linked the Amazon (regular) version here, but note that it’s NOT the one from Loot Crate. (Amazon Price: $22.94 for the non-exclusive)

TMNT Mask Glasses – These look reddish in the photo, but they’re actually orange — Michaelangelo! I’m not sure if I’m going to let the girls play with them, or trade them with someone whose actually a TMNT fan. (Amazon Price: $14.99)

Kidrobot TMNT Ooze Action Raphael Figure – Dare I say that I think this is cute? It totally is! I was a little confused about the whole “ooze action” thing, but it looks like the swords have green glow-in-the-dark “ooze” on ’em. I don’t see any on Raphael himself though. (He’d still be cute covered in ooze.) (Amazon Price: $18.34)

ShWings Shoe Lightning Bolts – Yeeeah… I won’t be sporting these on my shoes anytime soon. I actually thought they were a kid thing, but apparently not? I may have worn them in my “punk” days, just to be dumb, but I don’t think a mom in her mid-30’s could pull these off. 😉 (Amazon Price: $7.56)

Sonic Air Freshener – I’m not sure what “Sonic Breeze” smells like, but it’s gotta be better than “musty car”. My husband’s car freshener just ran out, so he’s happily going to replace it with this guy. (Amazon Price: $9.17)

Deadpool Magnet – I don’t know crap diddly about Deadpool, or what he eats for breakfast, but I spose I can still smack this up on my fridge. It’s a Loot Crate exclusive, so I’m guess-timating the price. (Retail Price: Umm… $1?)

Digital Loot – There are codes on the back of this card to download content for various games.

Wow! I continue to be totally impressed with Loot Crate. The value this month is insane! Using Amazon prices (and not counting the exclusivity of the Groot figure), the total of all items is roughly $74!! Crazy! Sure, some of the prices seem a little off (who would pay $9 for an air freshener??), but considering people are already paying over $30 for the Groot figure on eBay, I’d say it’s a fair estimate.

Disclosure: I received this box for review purposes. I was not compensated in any way. All opinions are my own. Post may contain affiliate links. Amazon prices subject to change at any time.