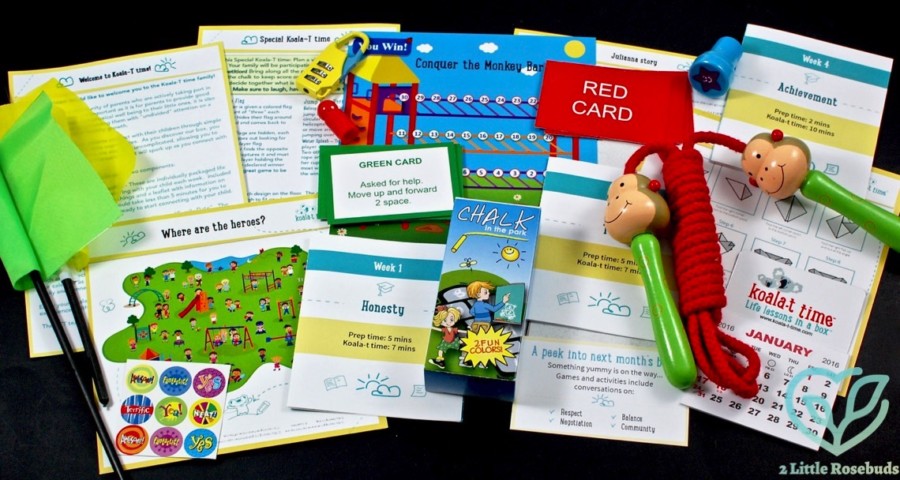 Koala-T Time is a monthly subscription box that provides an all-in-one quality time experience for parent and child.

Every month you’ll receive a themed box full of everything needed for a family quality time experience — such as indoor camping, ice cream, or travel fun. It will include simple, yet memorable games and activities that can be completed in less than 15 minutes each week. These “Koala-T times” start out with a short playtime where parents and children enjoy a fun time together. Additional playthings are later used on a casual yet meaningful conversation that promotes traditional values of good citizenship such as respect, honesty, negotiation, and community. Koala-T Time is specially designed for busy parents with children ages 4-8.

Subscriptions are $25/month, or less with multi-month commitments. 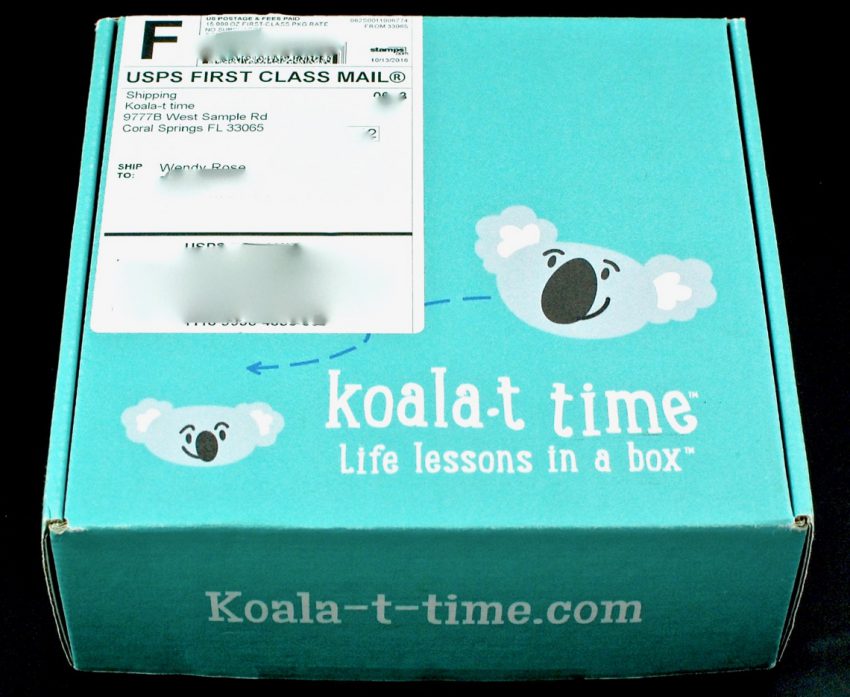 Everything was shipped in a custom teal box via first class mail. 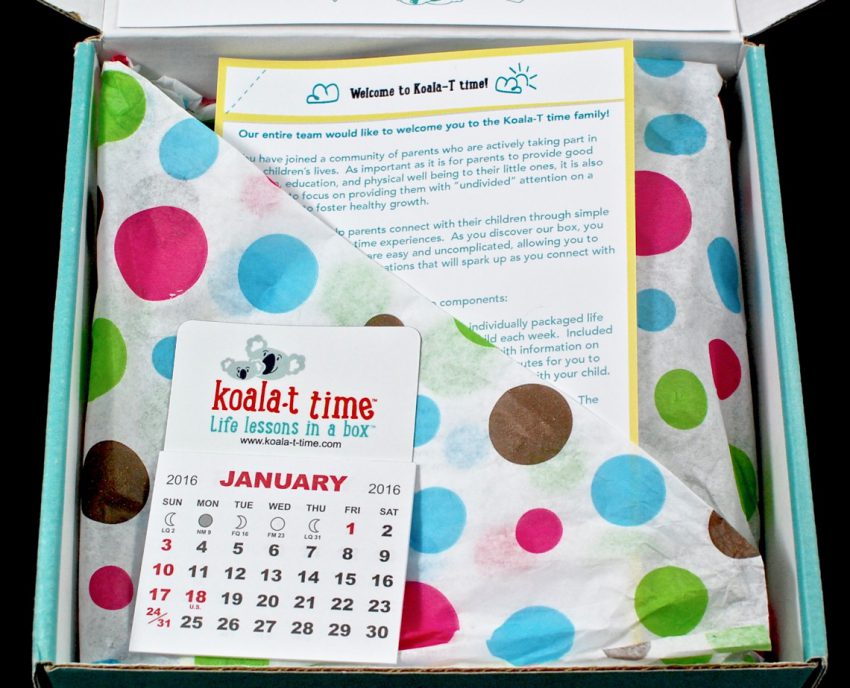 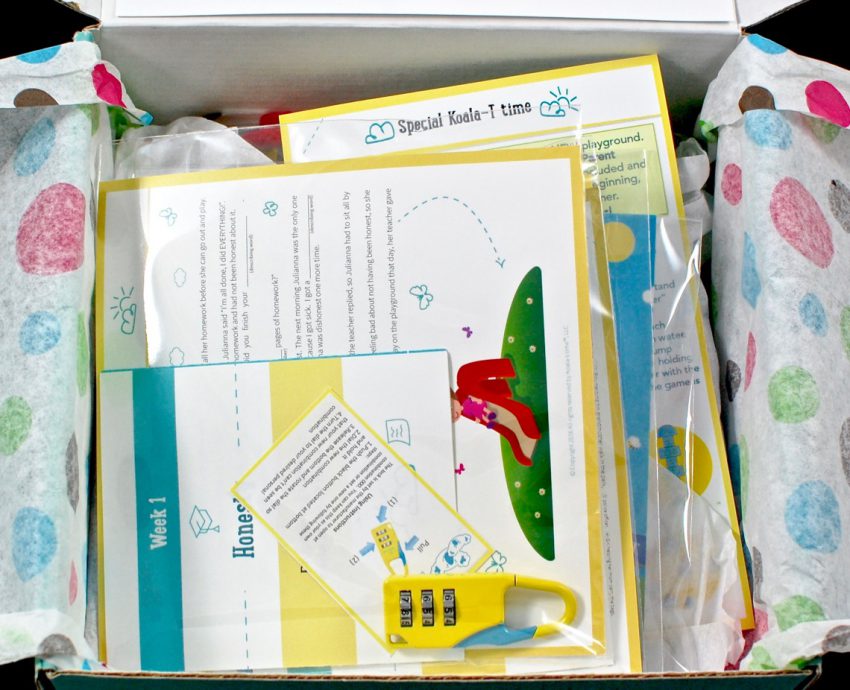 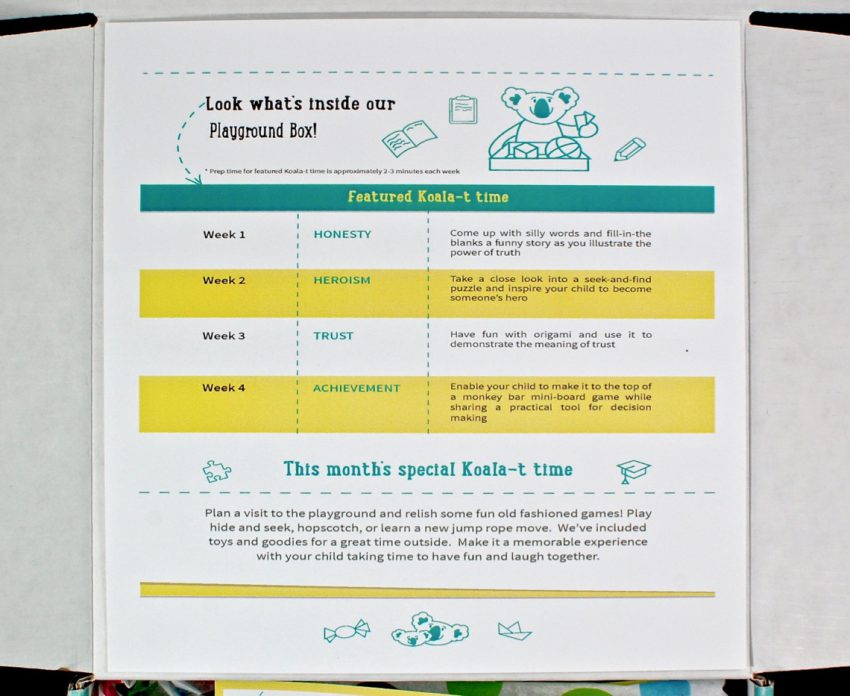 A card taped to the inner lid revealed the theme of this month’s box — “Playground” — and included a schedule for completing each of the activities over 4 weeks. 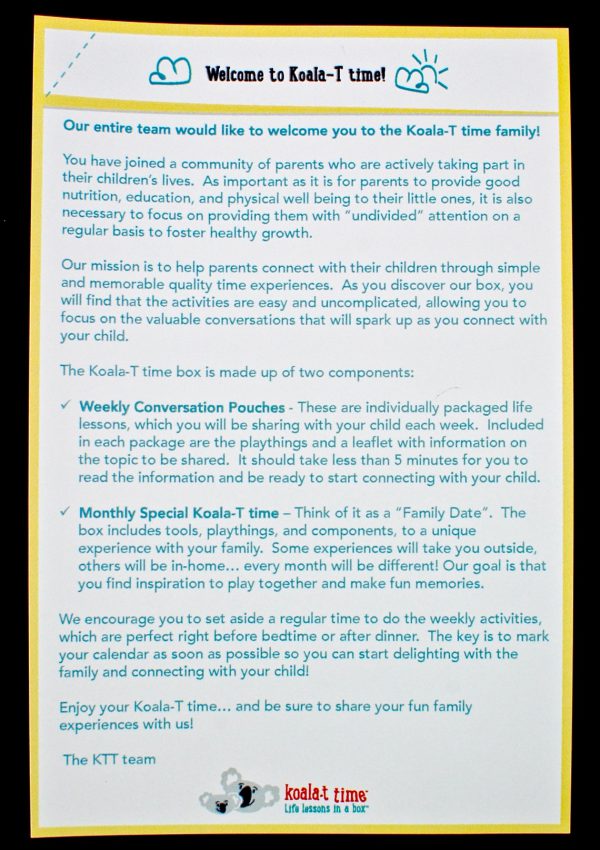 Another card explained more about the subscription and how the activities are structured. 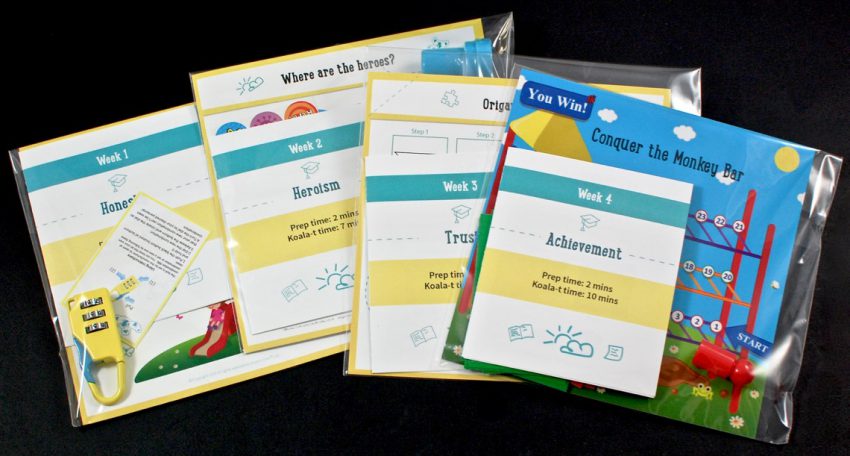 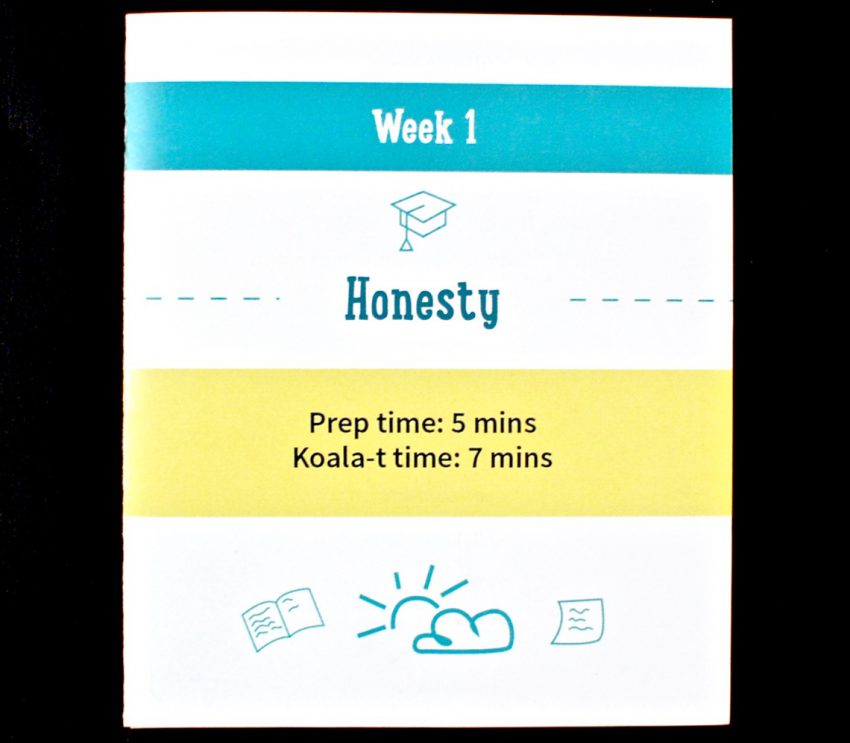 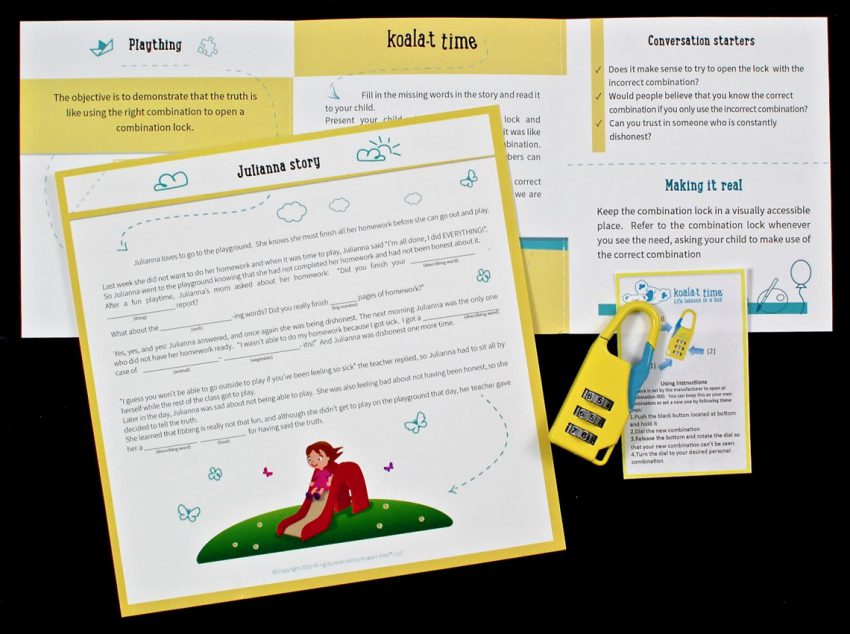 Week 1: Honesty – To help your child understand the importance of telling the truth, a short Mad Libs type story was included which told of a girl who lied about finishing her homework so she could go out and play. When she went to school the next day, she was the only one who didn’t hand in her work and she said it was because she was sick. As a result, she had to stay in the classroom while the other kids went out to the playground. Eventually she told the truth and was given a small reward by her teacher. A short, yet effective story to demonstrate why you should always be honest. To stress the point further, a combination lock was also included. Parents were to tell their child that being dishonest is like trying to open a lock with the wrong combination. 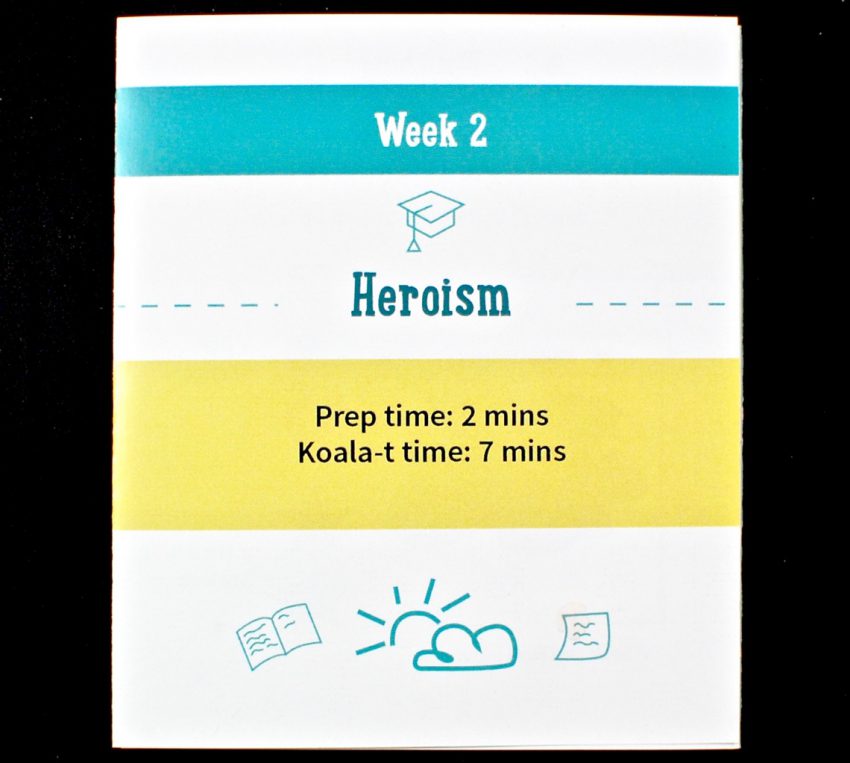 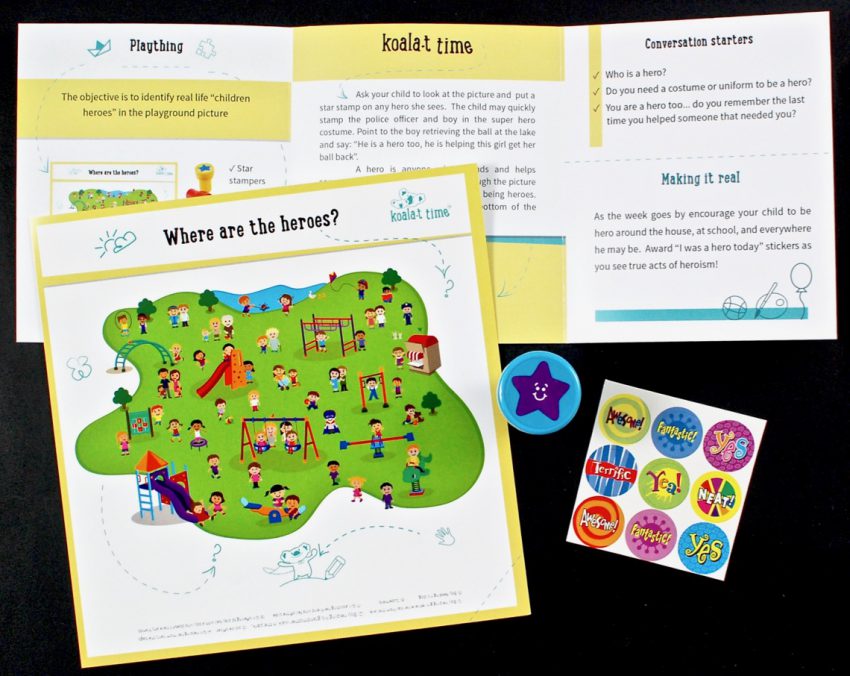 Week 2: Heroism – This activity was all about recognizing heroes in everyday life. A small illustration of a playground scene was included which showed various small acts of heroism. It was up to your child to seek out these heroes and mark them with the provided star stamp. Honestly, it was a little tough to figure out exactly what some of the acts were, but thankfully all of the answers were included at the bottom of the picture. There was also a sheet of reward stickers for parents to award to their child throughout the week as they notice them demonstrating their own small acts of heroism. 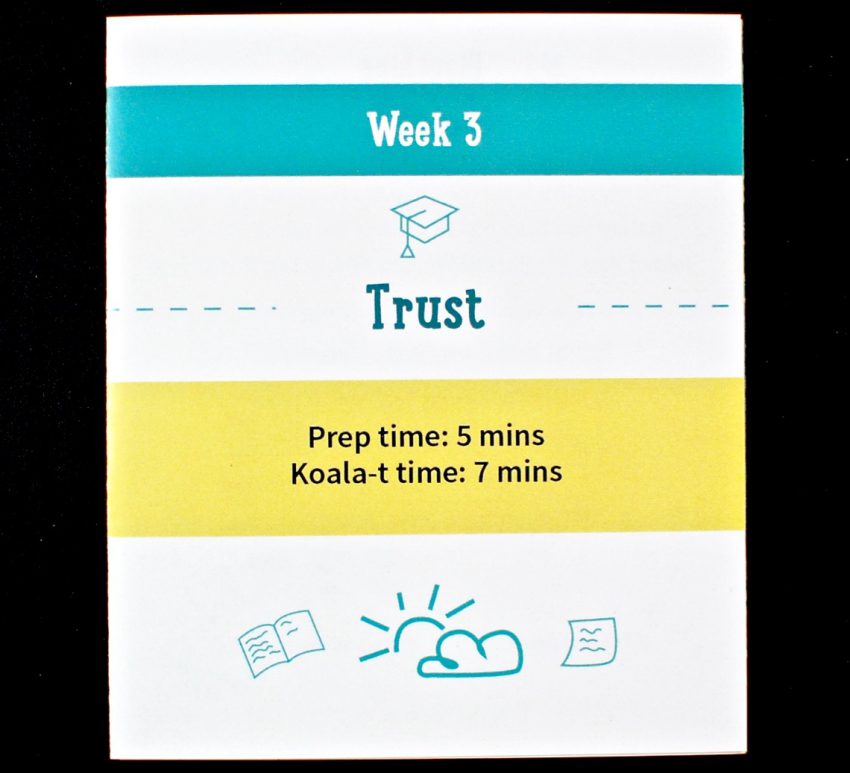 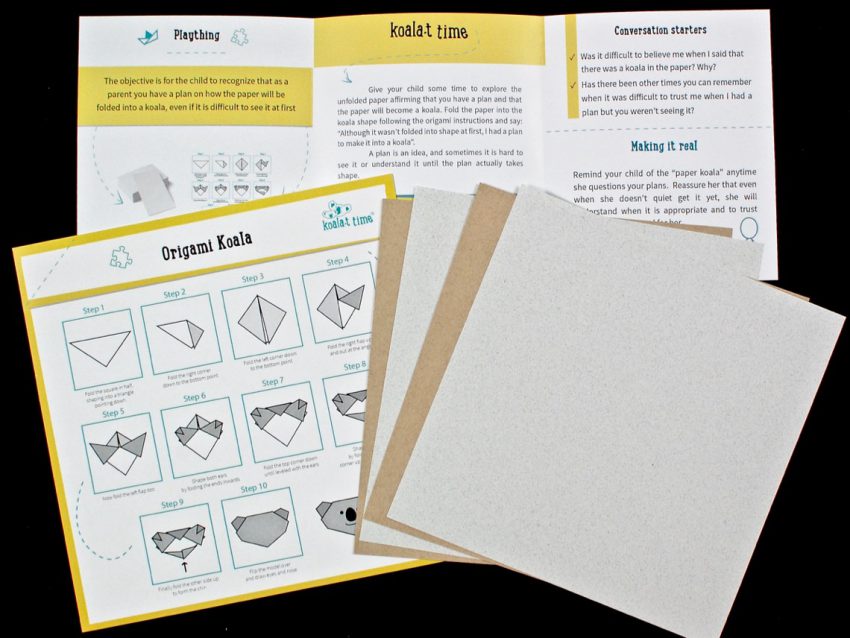 Week 3: Trust – The objective for this activity was to have your child understand that you had a plan to turn one of the enclosed sheets of paper into a koala. While following the folding instructions, explain how a plan is an idea, and that it may sometimes be hard to see it or understand it until it actually takes shape. Anytime your child questions your plans in the future, you can bring up the paper koala and reassure them that they can trust you to make a plan that’s best for them even if they don’t understand it at first. 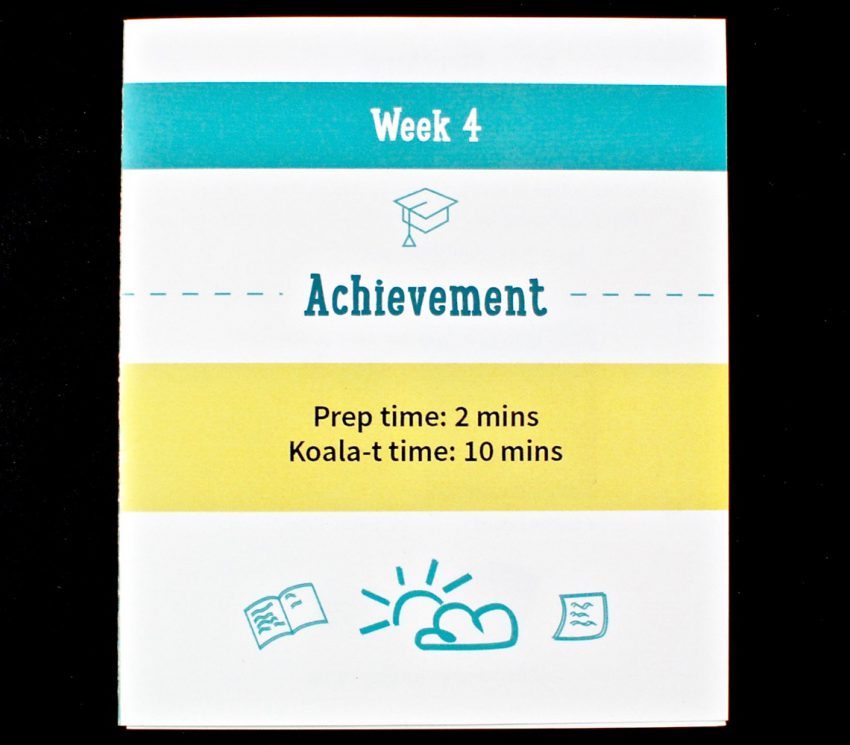 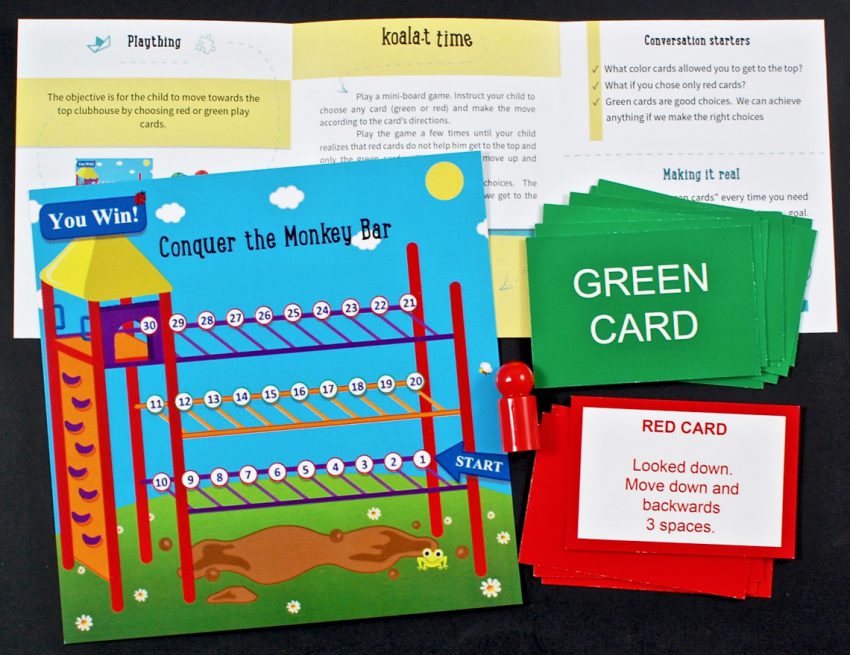 Week 4: Achievement – A simple board game whose goal was to start from the bottom of the monkey bars and reach the top by drawing either green or red cards. The green cards included directions to move forward on the bars, while the red ones all had your child moving back. You were to allow your child to pick whichever cards they wanted, until they eventually realized that only the green ones allowed them to progress in the game without going backwards. That’s when you could explain that the green cards represent good choices in life, and that the more good choices we make the faster we reach our goals. 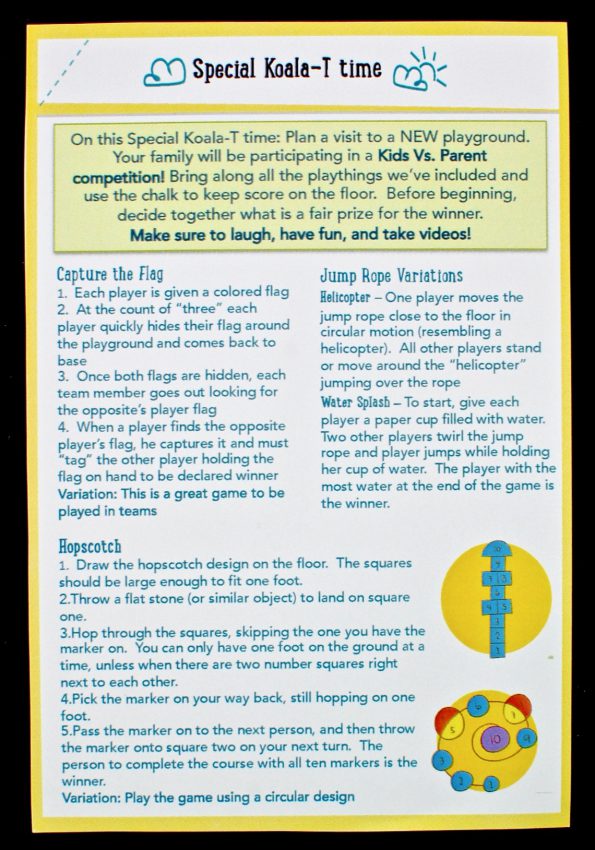 As mentioned earlier, the second component of the box was “Special Koala-T Time”. The card above explained that you were to visit a new playground and participate in a kid(s) vs. parents competition using the included playground items and instructions on the card. 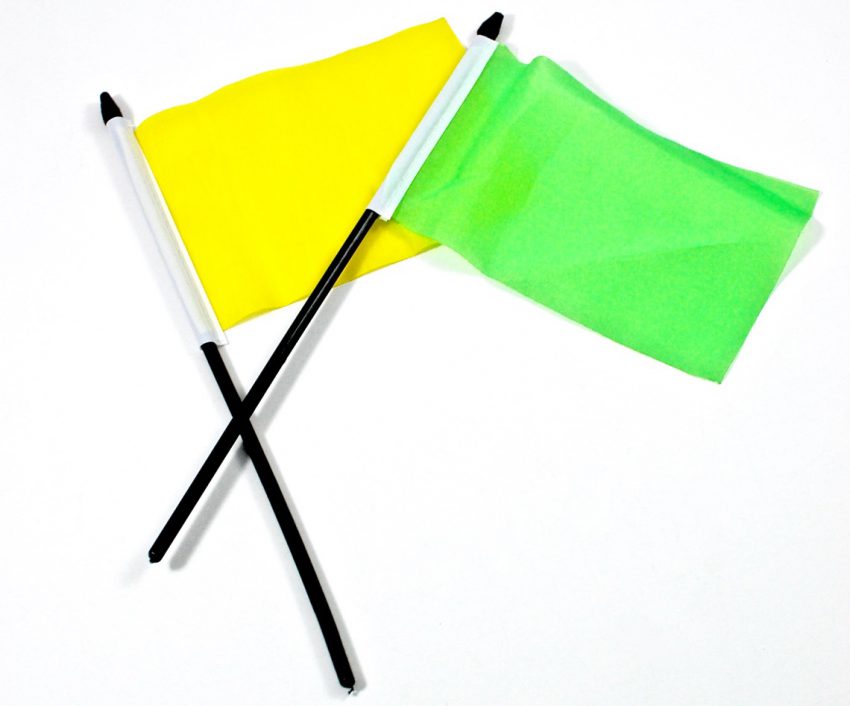 Two colored flags were provided for playing “Capture the Flag”.

A small pack of sidewalk chalk was included for playing a game of hopscotch. 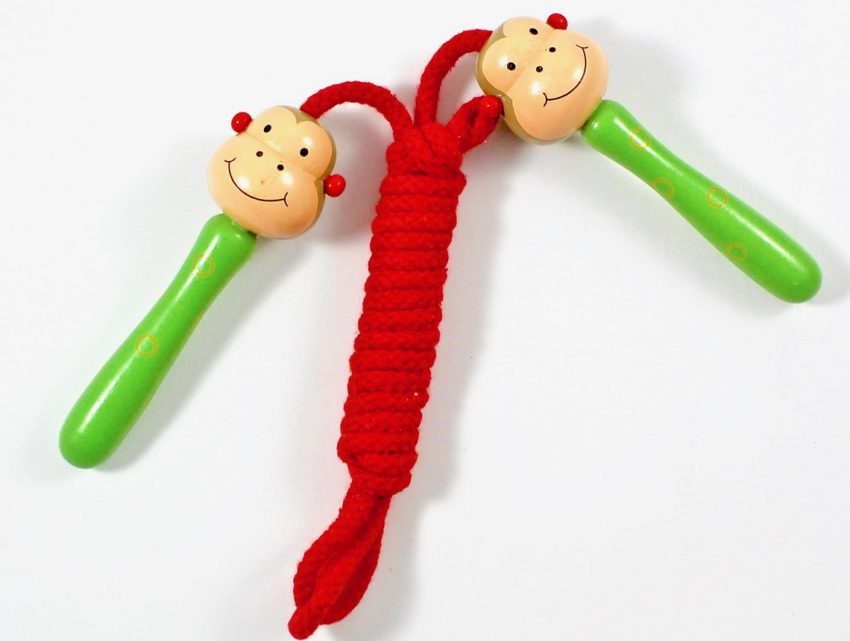 Finally, a jump rope for playing “Helicopter” and “Water Splash”, which were explained on the card.

Koala-T Time is a great subscription box for opening up important conversations with your children in a fun, non-intimidating way. I like how the weekly activities were simple and straightforward, yet still did a good job of effectively addressing the topic at hand. The content seemed like it was really well thought-out and a lot of care was put into delivering a box that would help bring families together for koala-t time. 🙂

A well thought-out subscription box to help you instill good values in your children through simple games and activities.