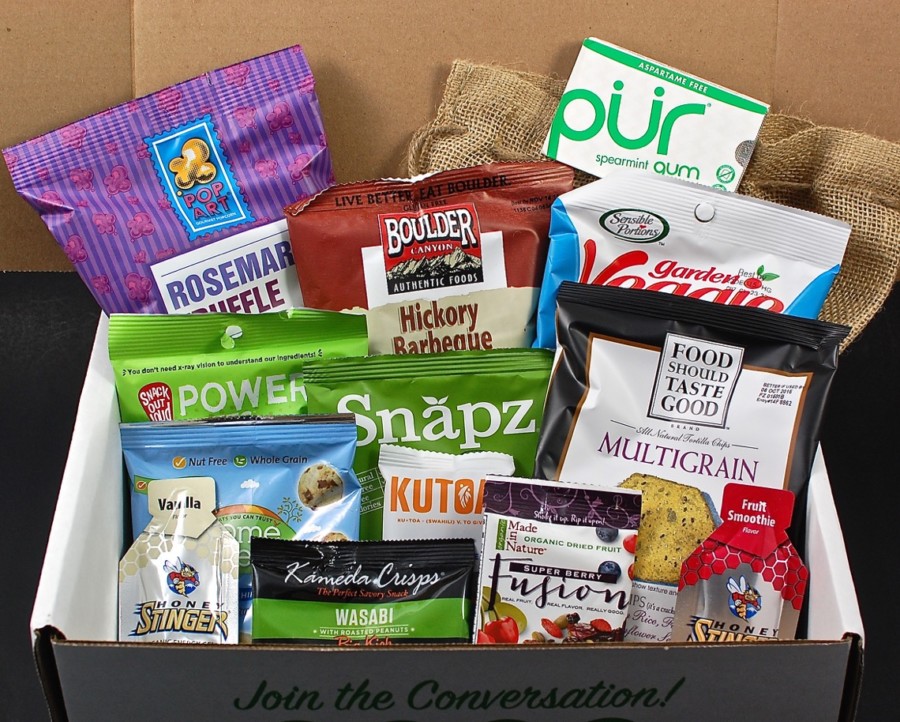 Yay! July’s box of awesome snackage from SnackSack has arrived!

If you’re not aware, SnackSack is a relatively new subscription box that focuses on delivering natural, “junk-free” snacks to your door every month. All of the snacks included will be free of “artificial junk” and offer a mixture of all natural, vegan, organic, non-GMO, gluten-free, and fair trade products. They’ll all be tucked inside a reusable burlap sack, which is shipped in a large box for ultimate snack protection.

Subscriptions are $23/month with free shipping. Discounts are also available for multi-month plans. (There’s also one at the end of this post!) 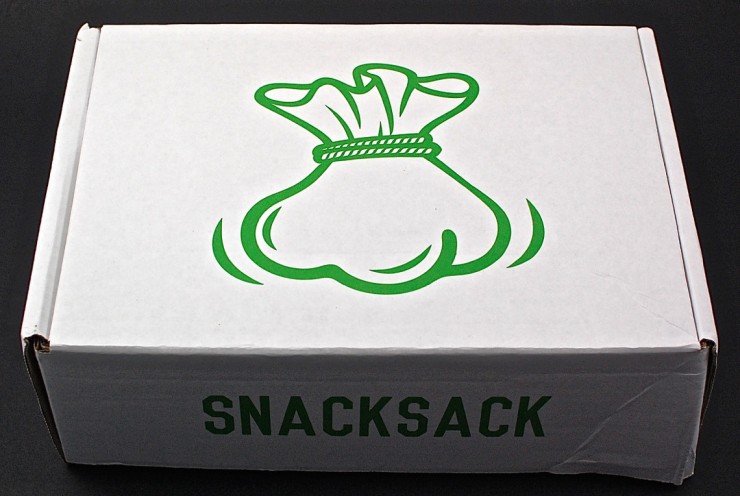 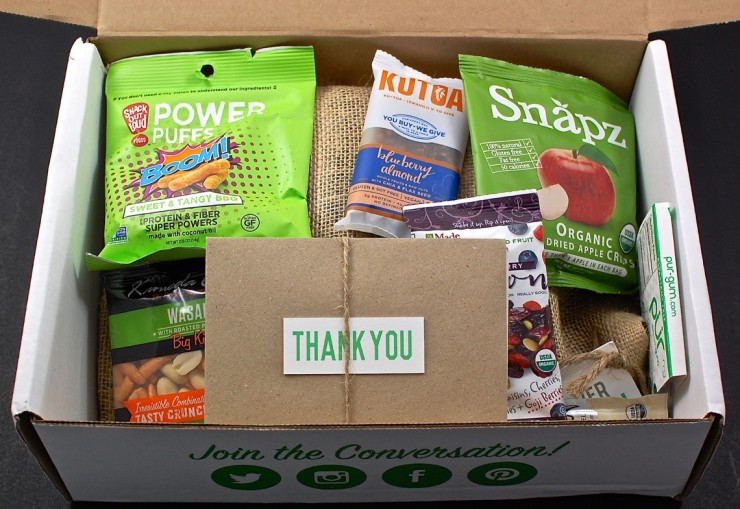 A peek inside: The top layer of snacks. The rest are packed inside of the burlap sack below. 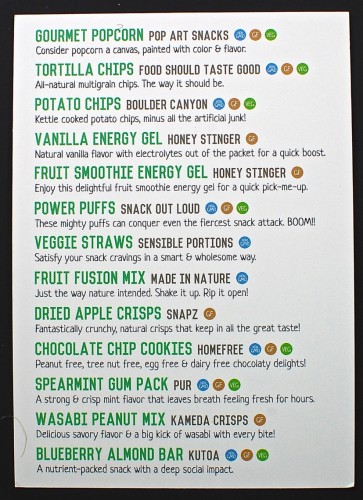 The information card listed everything inside, along with a brief description. There are also little symbols next to each one indicating whether it’s vegan, gluten-free, and/or non-GMO. I actually noticed a few items that were in fact vegan, but not labeled as such on the card, so… Don’t rely on the symbols alone if you’re vegan/gluten-free! 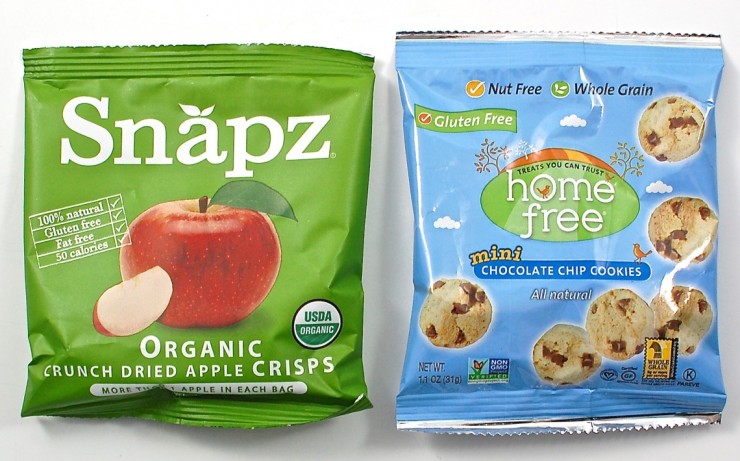 Snapz Organic Crunch Dried Apple Crisps – This is one of the items that’s clearly vegan, but not listed as such on the info card. Not a big deal, just wanted to mention it. (I’m actually happy to find that there are even more vegan items than I originally thought. Woo!) Oh yeah, this snack is made with just apples and a bit of lemon juice. Very healthy, very vegan. 😉

Homefree Mini Chocolate Chip Cookies – LOVE these! Crunchy little chocolate chip cookies that are free of most common allergens. You’d never know that they were “missing” anything. Delicious. 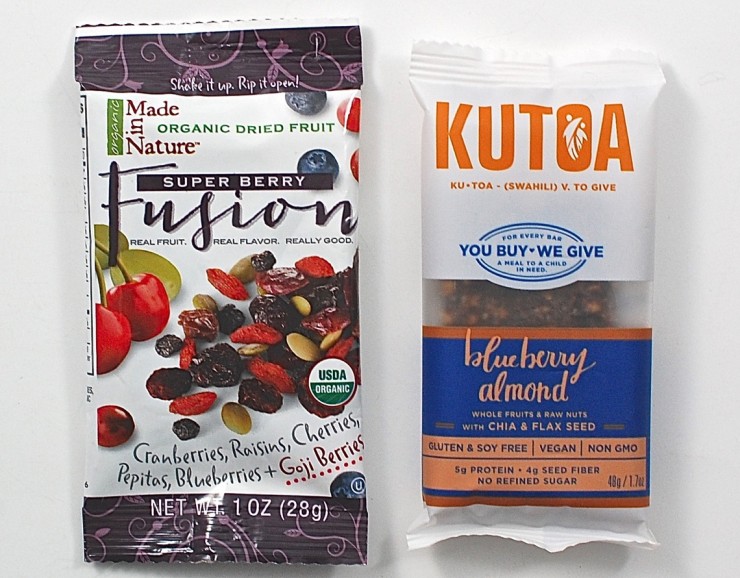 Made in Nature Fruit Fusion Mix – I just devoured this bag and it was pretty tasty. A healthy mix of organic cranberries, raisins, cherries, pepitas, blueberries, and goji berries. Yum!

Kutoa Blueberry Almond Bar – These bars have been in a bunch of subscription boxes lately. I don’t mind at all, since they’re vegan, gluten-free, and quite delicious. They’re made with whole fruits, raw nuts, and NO refined sugar. 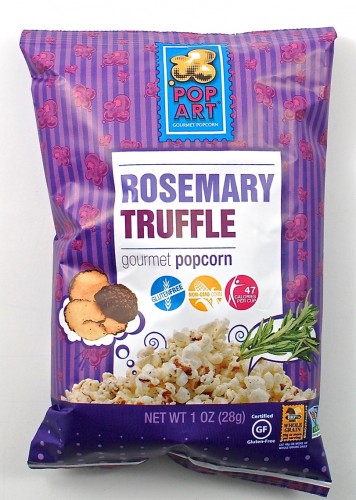 Pop Art Rosemary Truffle Gourmet Popcorn – This was most definitely the strangest-tasting popcorn I’ve ever had. I love rosemary, so that wasn’t an issue… but truffles? Not so much. I’ve actually never had them so I wasn’t sure what to expect, but I was NOT a fan. That said, I did still manage to eat the entire bag. (Hey, I was hungry.) 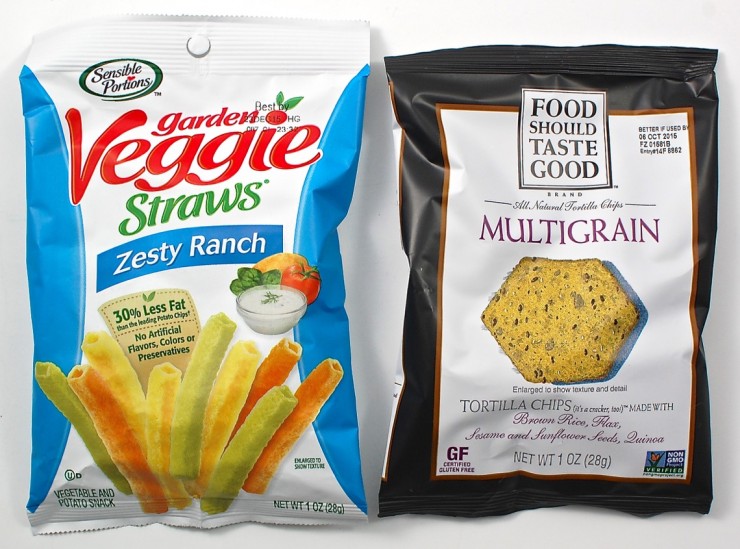 Sensible Portions Garden Veggie Straws – I was happy to see these veggie straws until I noticed they were ranch flavored. The original flavor is so good (and vegan). Ah well. I’ll see if my kiddos will eat ’em. I don’t think they’ve ever had ranch-flavored… anything before.

Food Should Taste Good Multigrain Tortilla Chips – Ooh! These chips are great! I haven’t had them in a while and they still tasted as good as I remembered. They’re made with brown rice, flax, quinoa, and other good stuff not found in traditional tortilla chips… Yet they don’t taste “healthy” at all. So good. 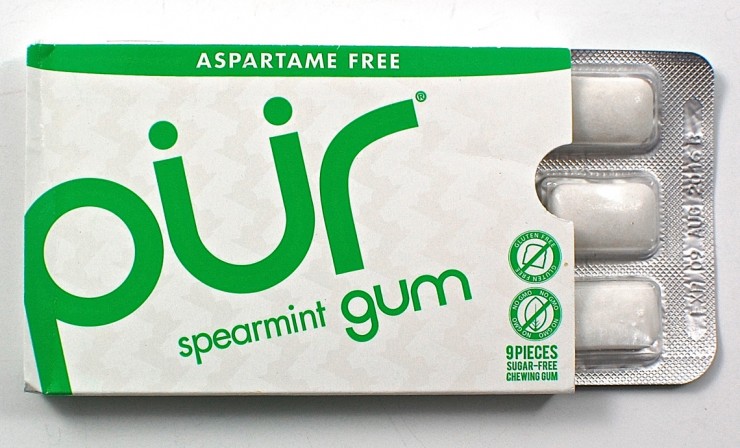 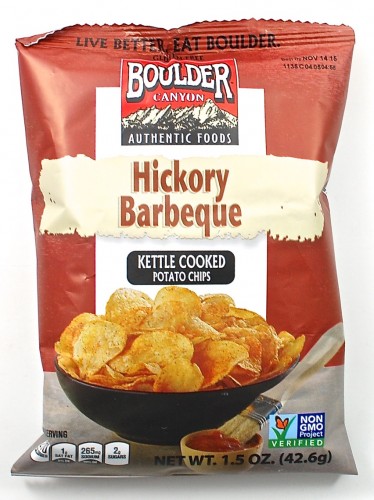 Boulder Canyon Hickory Barbeque Kettle Cooked Potato Chips – BBQ flavored kettle chips made with non-GMO potatoes. I’m all about kettle cooked chips and I love BBQ flavor, so this is a total win. 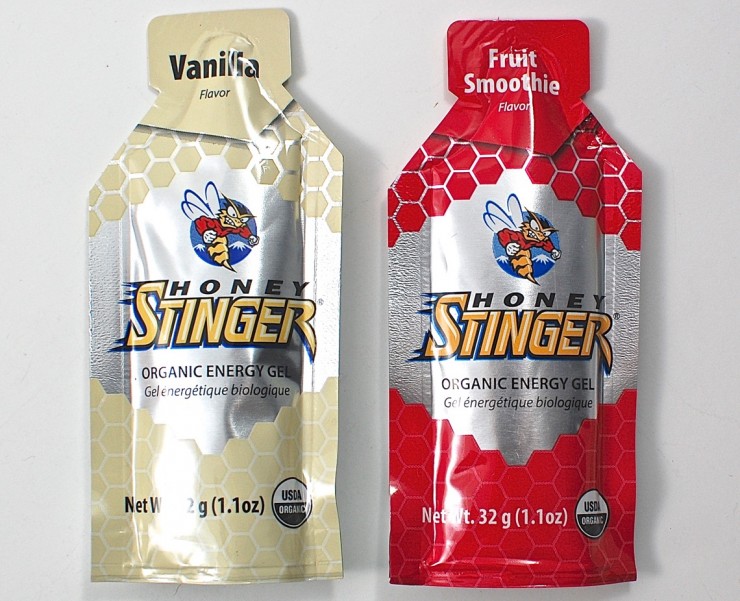 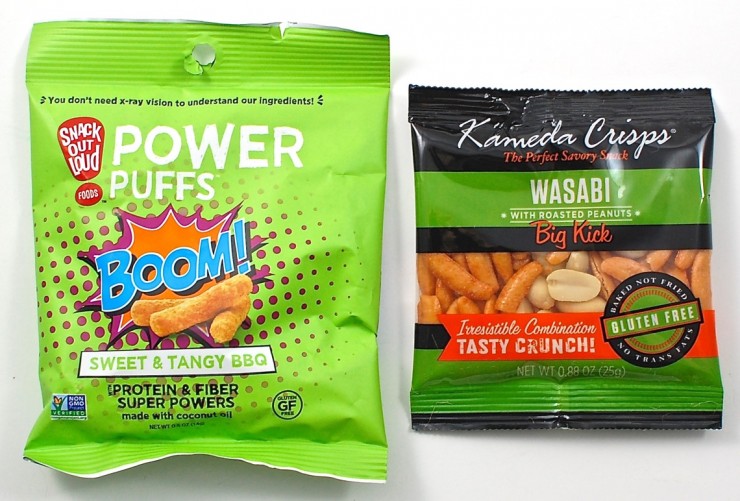 Snack Out Loud Sweet & Tangy BBQ Power Puffs – These are a healthy alternative to cheese puffs… They’re made with navy beans, brown rice, and other natural ingredients. These also happen to be vegan, gluten-free, and non-GMO.

Kameda Crisps – A savory snack consisting of peanuts and crackers with a wasabi kick. 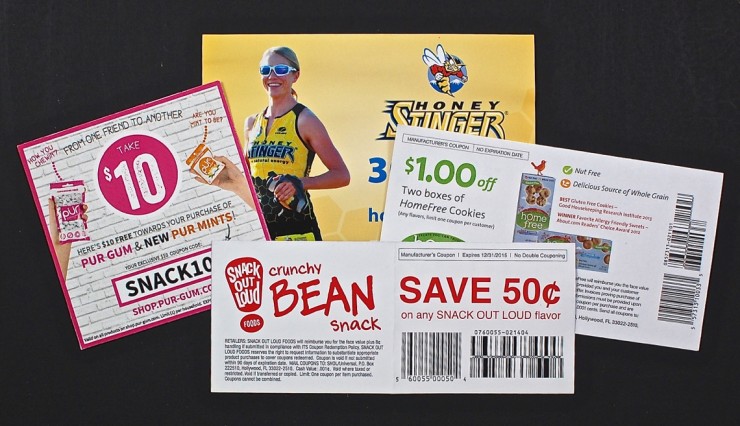 A few coupons were also included in the box.

I’m totally happy with July’s SnackSack. I received it yesterday and have already devoured almost half of the snacks. Once again there was a nice mix of both sweet and salty snacks, as well as savory and fruity.

If you’d like to try out SnackSack for yourself, you can save 10% on your first purchase with my exclusive coupon code “ROSE10″!

Another nice offering from SnackSack! The info card could use a little tweaking (the whole symbol issue), but other than that, a great box of snacky goodness.