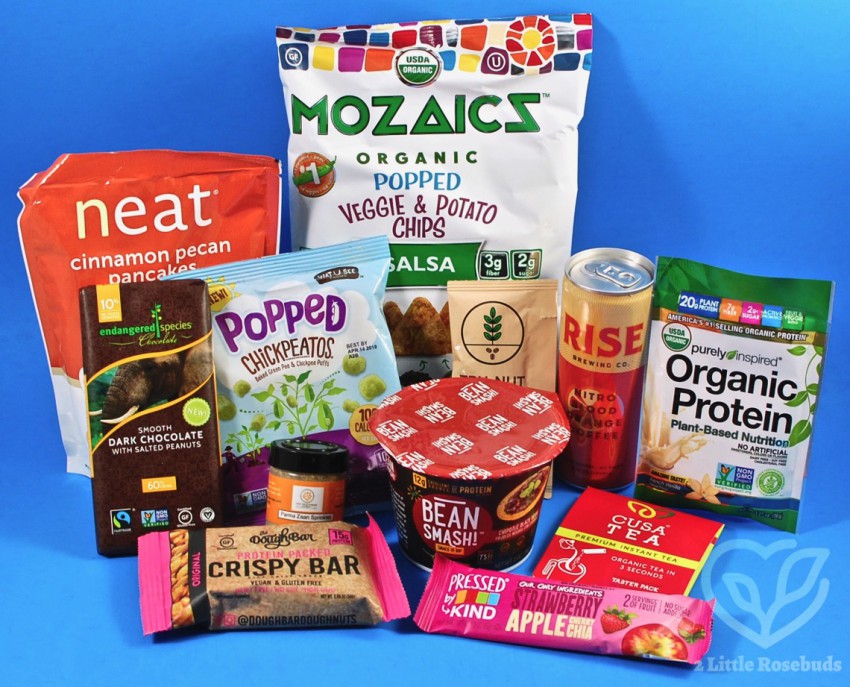 The Vegan Cuts Snack Box is a subscription box that sends an assortment of vegan-friendly snacks to your door every month.

Each box will consist of at least 10 or more vegan goodies, many of which will also be gluten-free. Items can include chips, beverages, snack bars, sweet treats, condiments, popcorn, tea, and more. You can expect to receive a mix of both full and sample sized products in every box — all 100% vegan!

Disclosure: I received this box for review purposes. Post may contain affiliate/referral links.

Subscriptions are $22.95/month, or less with multi-month commitments. Shipping is free within the US. 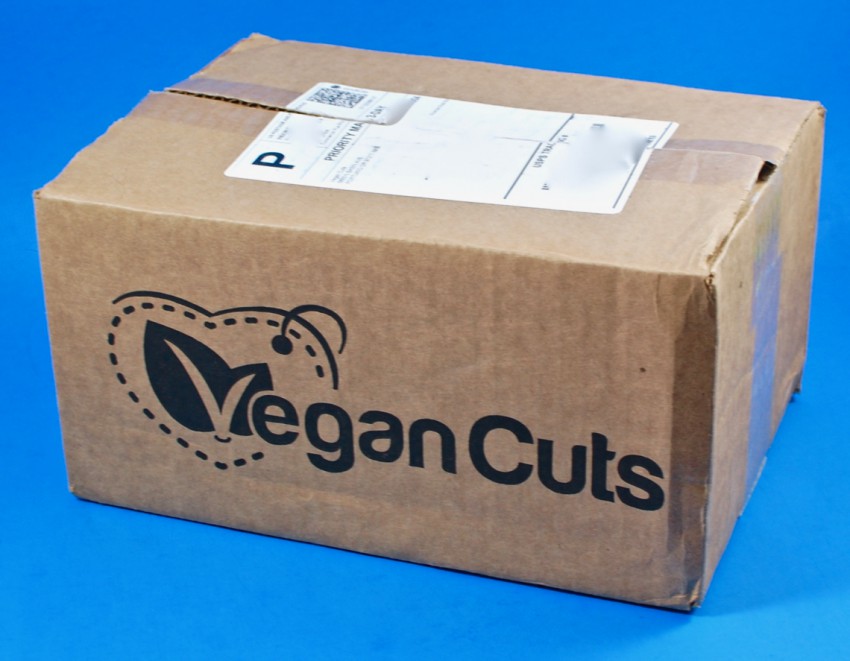 Everything was shipped in a standard brown box with a large Vegan Cuts logo on the side. 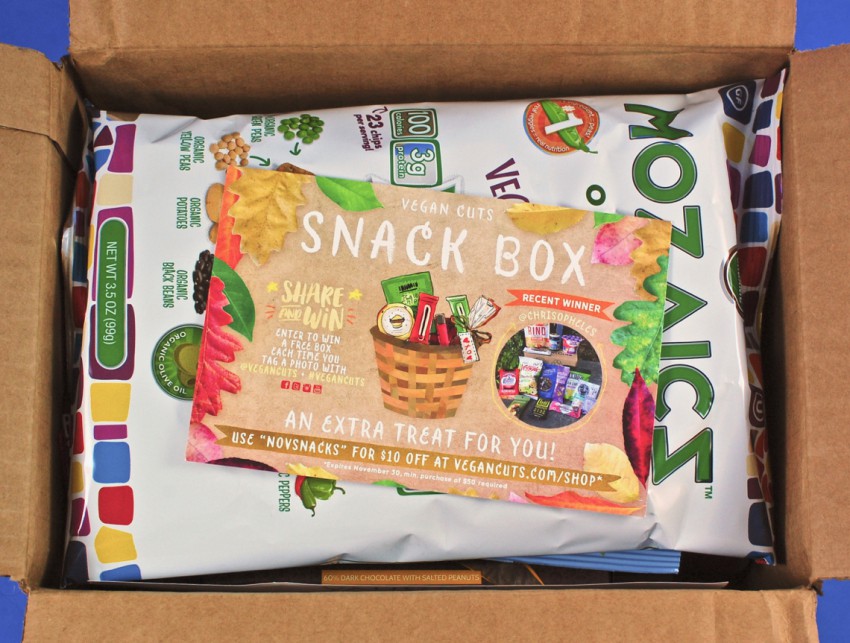 A peek in the box! 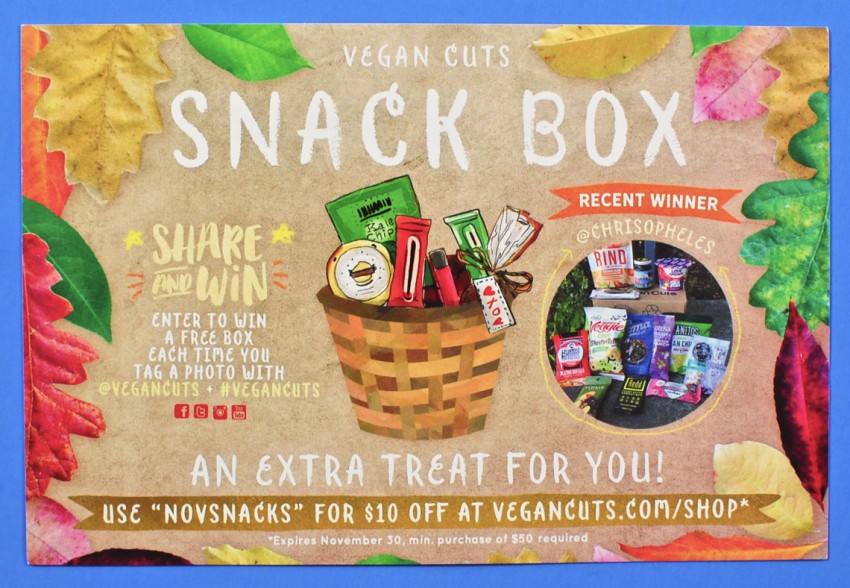 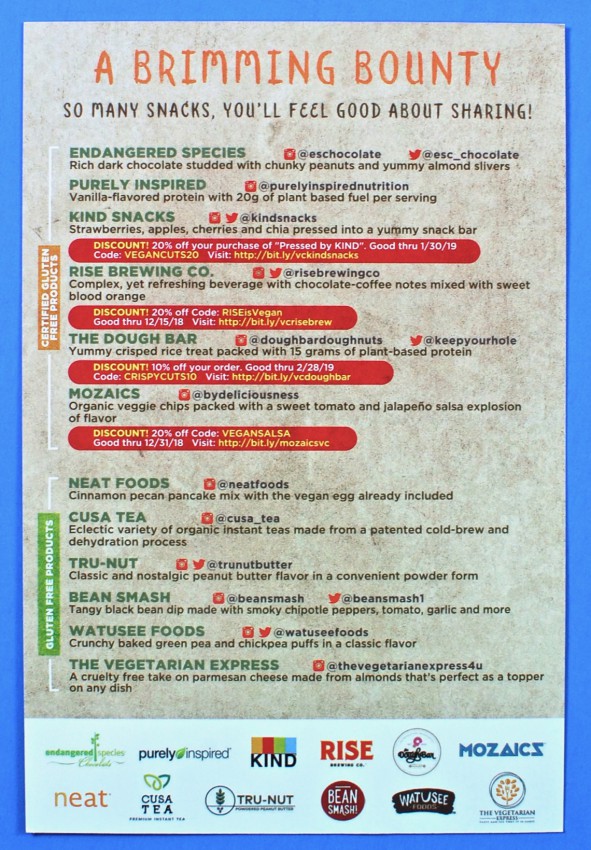 An info card listed all the items inside November’s box, along with brief descriptions and social media handles for each one. 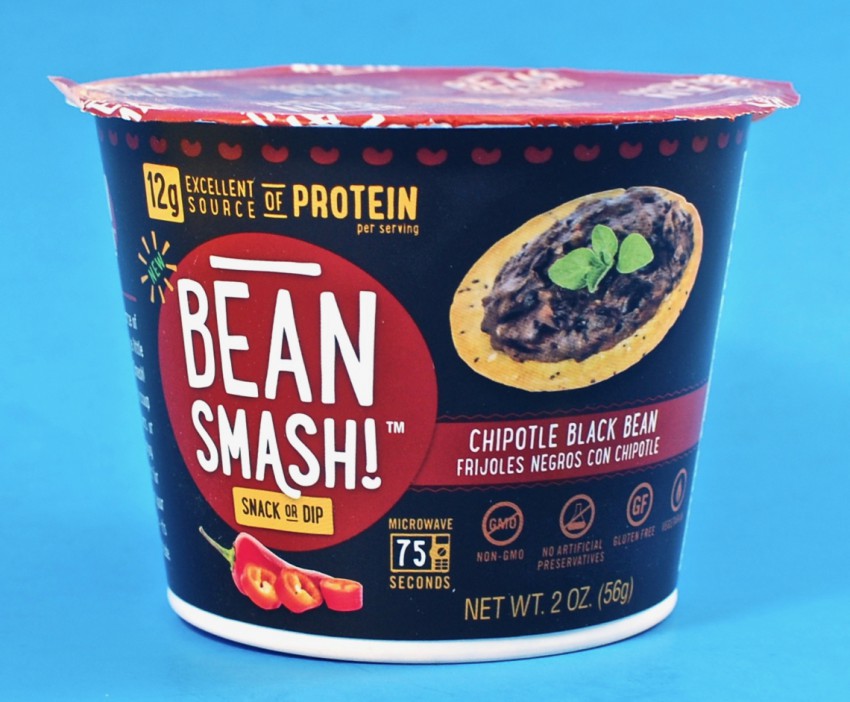 I’ve seen these at my local grocery store and was always curious about them (but too lazy to check to see if they were vegan-friendly). Turns out, they are vegan (or at least this flavor is) and you can enjoy it alone as a protein-packed snack, or paired with chips & veggies as a dip. To make, simply fill with water to the line indicated on the label, microwave for 75 seconds, let stand for 5 minutes, and enjoy! 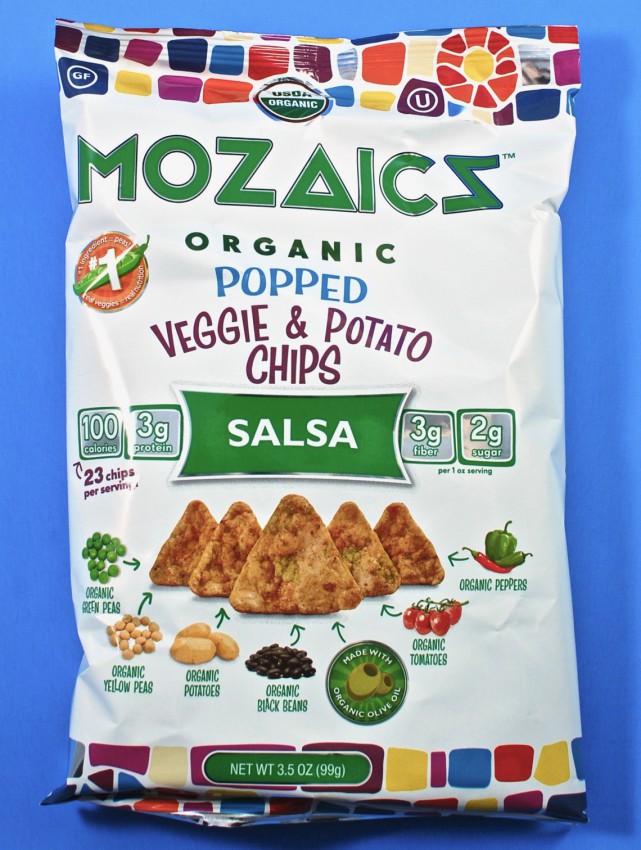 These crispy “popped” veggie & potato chips would pair nicely with the dip above. They’re made with organic veggies including green peas, tomatoes, black beans, potatoes, and peppers. Each serving has just 100 calories, along with 3 grams of both protein & fiber. 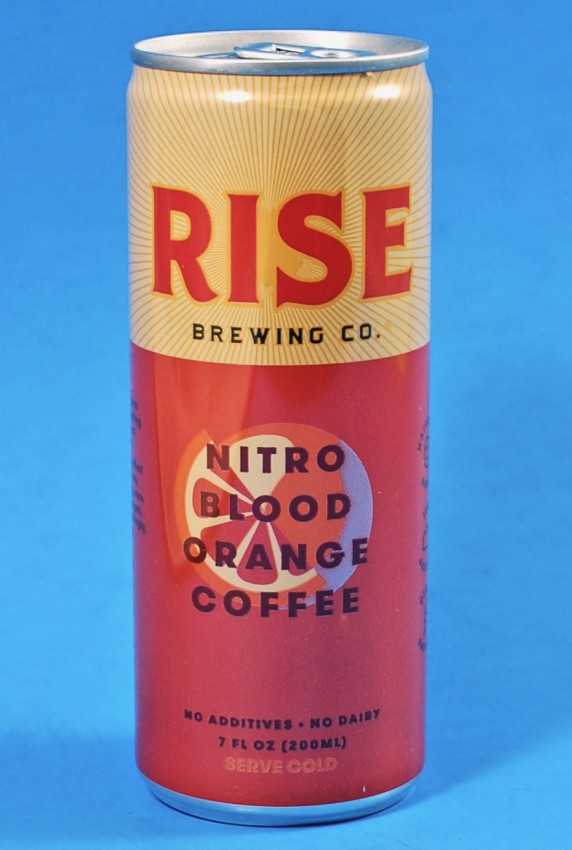 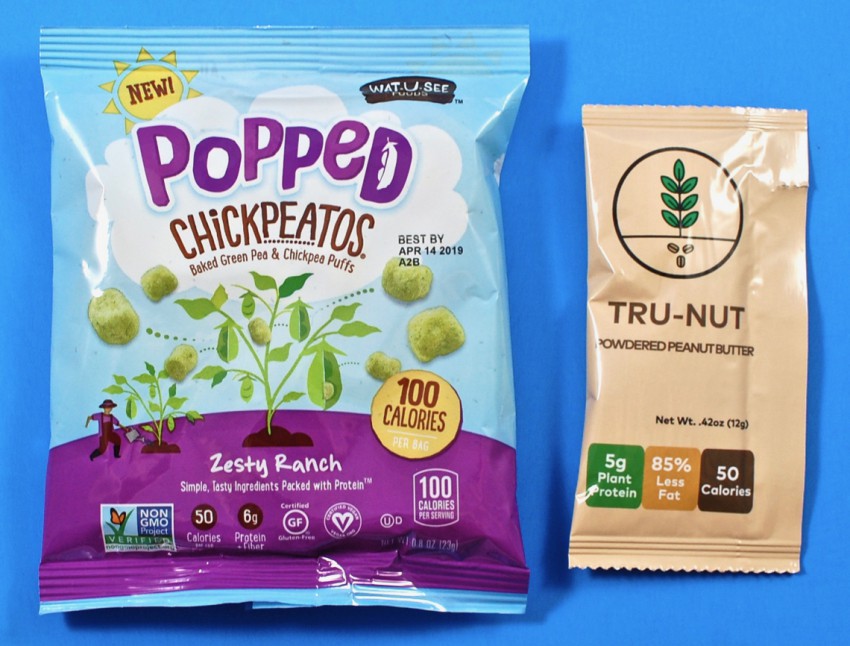 I’ve had these chickpea-based snack puffs a few times before and they’re pretty good. They’re made with a blend of green peas, rice, chickpeas, rice milk, sunflower oil, and a handful of flavorful spices. One serving has 3 grams of fiber, 3 grams of protein, and only 100 calories. These are also gluten-free and vegan friendly. 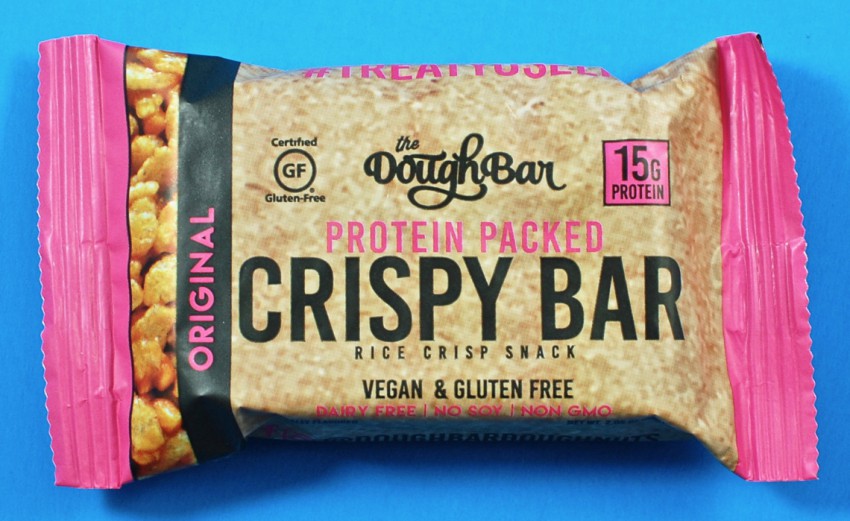 This tasty bar is like a healthier, protein-packed, vegan-friendly version of a Rice Krispies Treat. I’ve had the chocolate chip version once before and it was delicious! Each Original bar has an impressive 9 grams of fiber, 15 grams of protein, and just 3 grams of sugar. 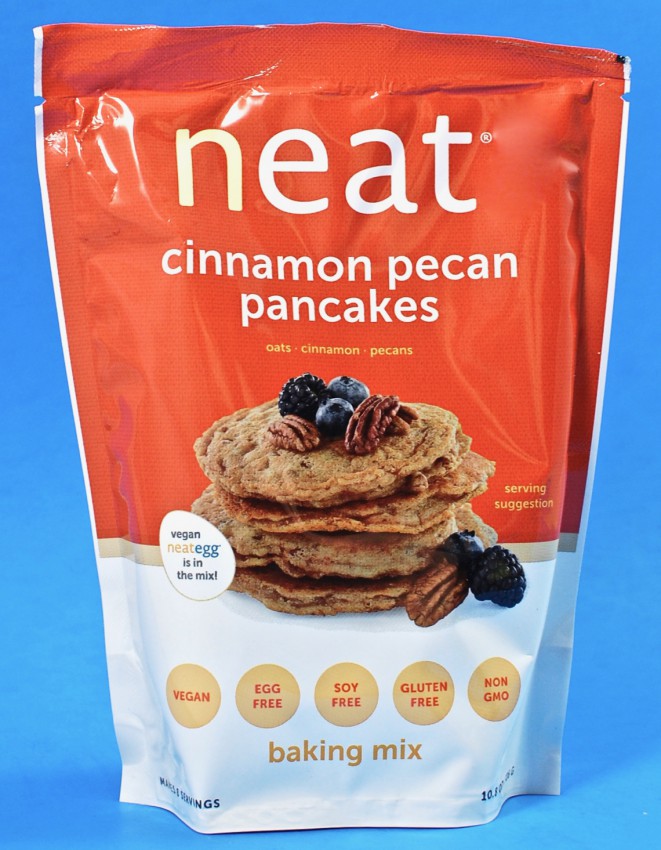 Pancakes!! I usually make my own with a super basic recipe, but these cinnamon pecan ones sound absolutely delicious. All you need to add is non-dairy milk & a cooking oil of your choosing (though I’ll probably nix the oil and use applesauce instead). The mix is not only vegan-friendly, but also soy-free, gluten-free, and non-GMO. 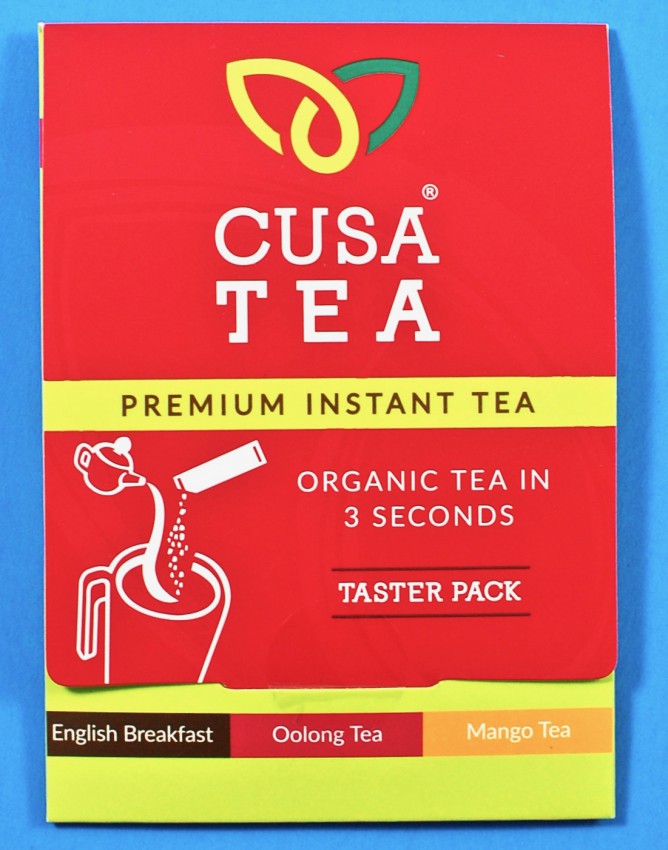 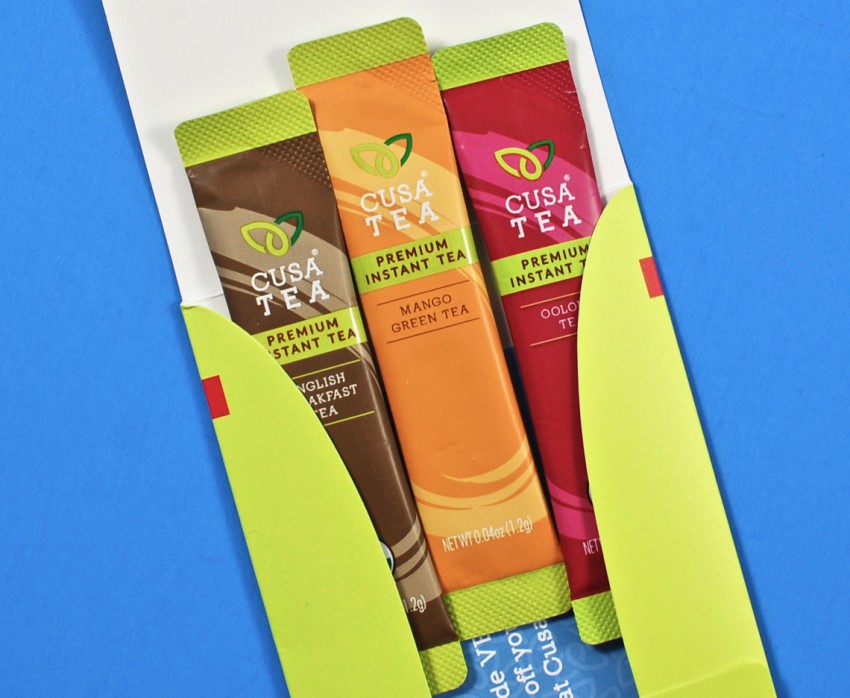 These instant teas are made from a patented cold-brew and dehydration process — allowing you to make a cup of hot tea in just 3 seconds. The 100% organic tea has zero sugar, preservatives, or flavorings. Three different flavors were included: English Breakfast, Mango Green Tea, and Oolong Tea.

A kid-friendly snack bar made with just 4 simple ingredients: Apples, strawberries, cherries, and chia seeds. It has no added sugar and is the equivalent of 2 servings of fruit. 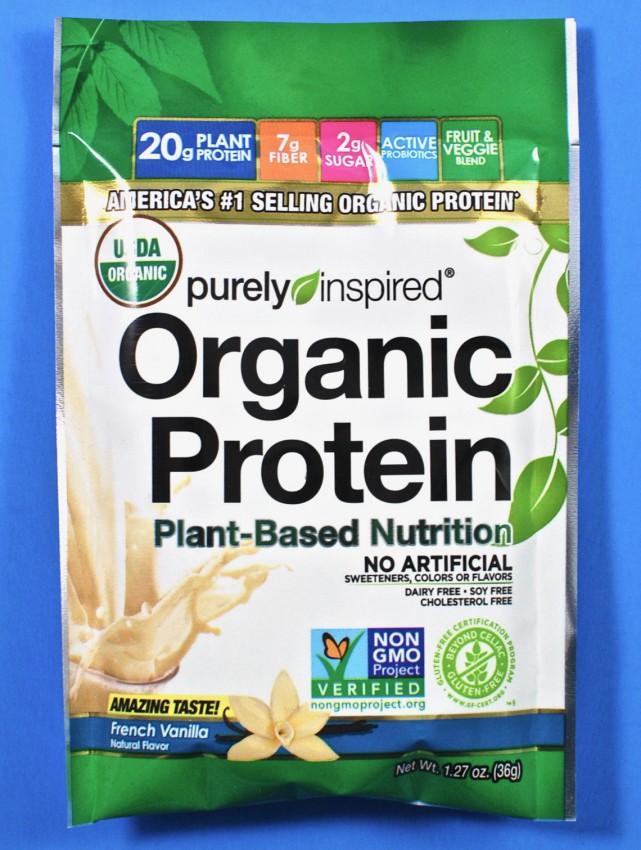 I’m always happy to see these vegan-friendly protein powder packets. I drink a smoothie every day and these make a great addition. They’re gluten-free, non-GMO, and have an impressive 20 grams of plant-based protein per serving. 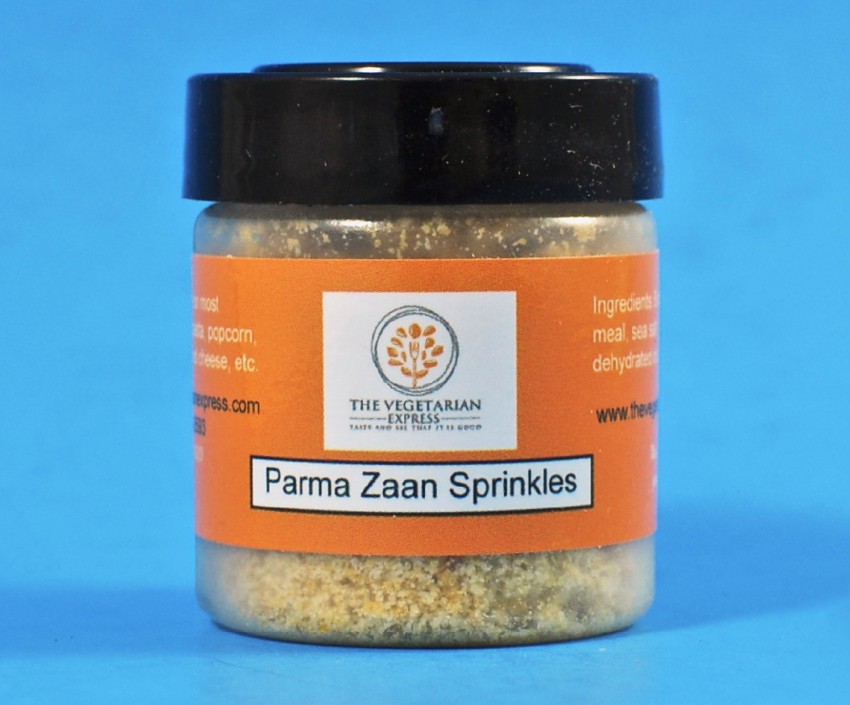 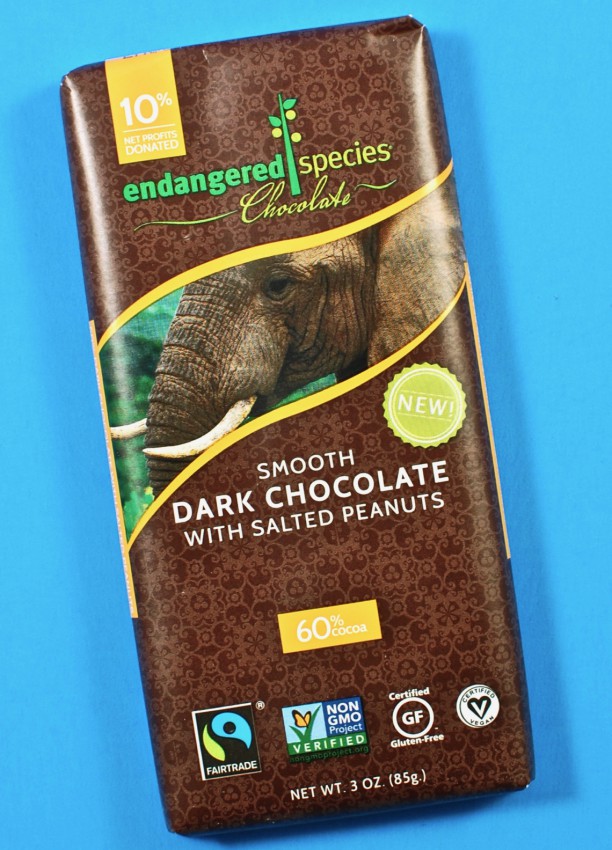 When I first went vegan (temporarily in the late 90’s/for good in 2003), finding vegan-friendly chocolate wasn’t easy. Endangered Species bars were one of the few options available at the time and I was very grateful for them. 😉 That said, I haven’t actually purchased one in a long time so I was excited to see this new dark chocolate/salted peanut variety included in November’s box. I cannot WAIT to dig into it! 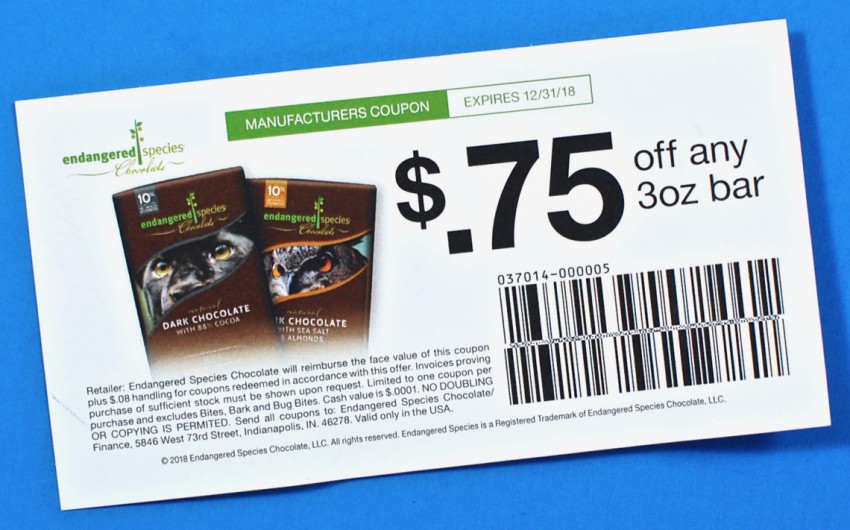 They also included a coupon to use on a future purchase. (Yay!)

I haven’t reviewed a Vegan Cuts Snack Box in a while, so I was happy to see that they still deliver on sending a great variety of vegan (and gluten-free!) snacks, sweets, and more. My personal favorite items from November’s box were the Neat Cinnamon Pecan Pancakes, Bean Smash, Dough Bar Original Crispy Bar, and Endangered Species chocolate bar. Yum! 🙂