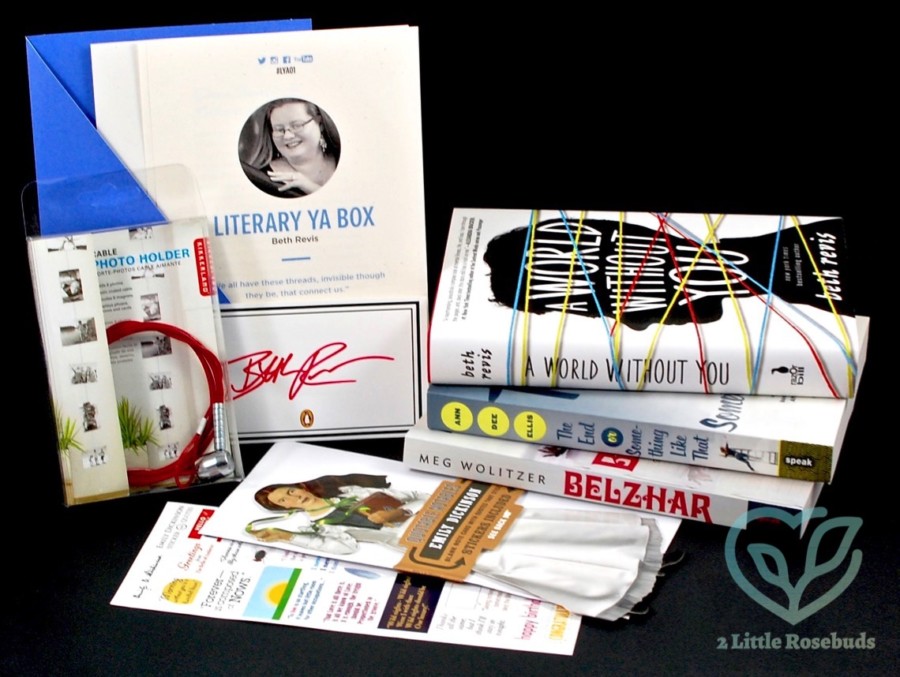 Quarterly Co. is a subscription service that offers a collection of boxes personally put together by influential authors, entrepreneurs, actors, and more.

Subscribers can choose from a variety of themes and/or curators such as the Culinary Box (by Chef Niki Nakayama), Nina Garcia Box (style & fashion items), and the Literary Box (author curators change quarterly). As the name suggests, your chosen curator will send you a box of their personally selected items on a quarterly basis (one box every 3 months). Each product you receive will reflect on the person who selected it, and help inform your understanding of them. Pretty cool!

Subscriptions vary based on which box/curator you choose, but they start at $50/quarter. 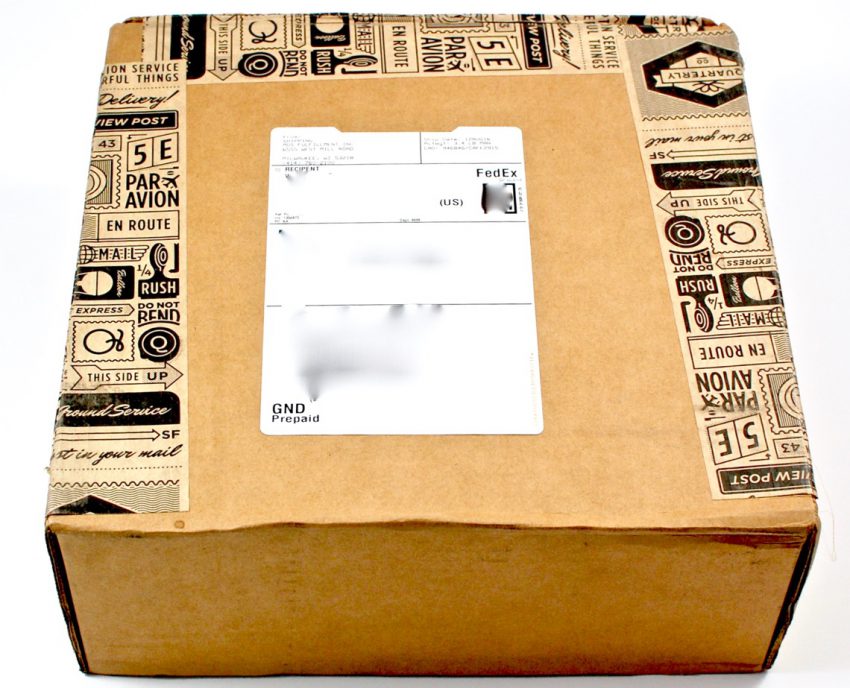 Everything was shipped in a standard brown box via FedEx. 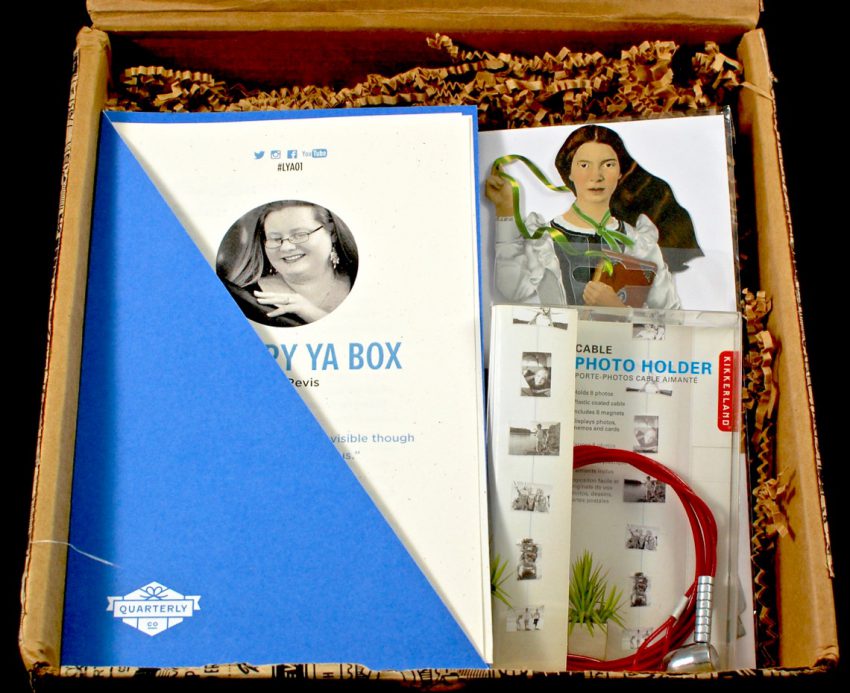 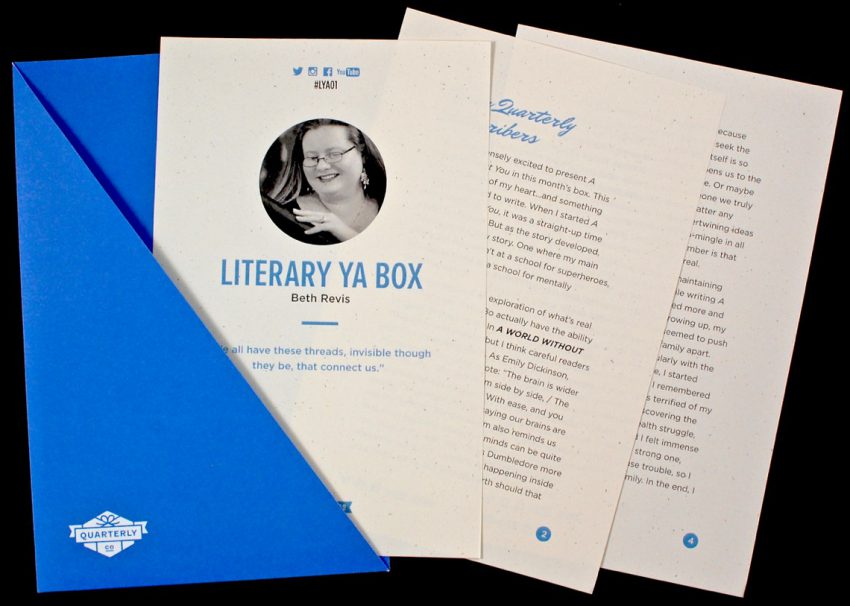 The curator for this quarter’s Literary YA box was author Beth Revis. A 4-page letter from Revis was enclosed, which explained the reasoning behind all of her book/product choices. 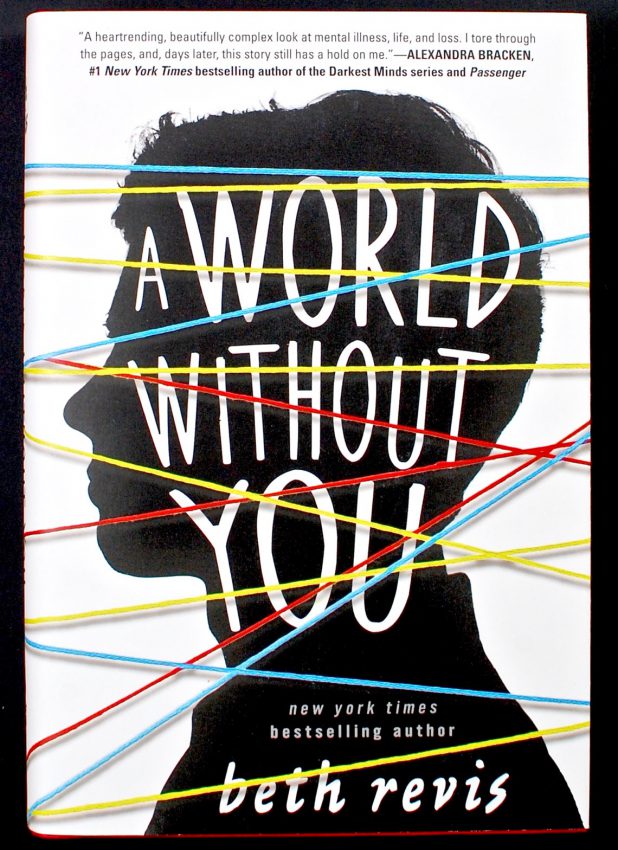 A World Without You by Beth Revis – Revis included her latest work, described as a semi-autobiographical story blending the supernatural with mental illness.

Seventeen-year-old Bo has always had delusions that he can travel through time. When he was ten, Bo claimed to have witnessed the Titanic hit an iceberg, and at fifteen, he found himself on a Civil War battlefield, horrified by the bodies surrounding him. So when his concerned parents send him to a school for troubled youth, Bo assumes he knows the truth: that he’s actually attending Berkshire Academy, a school for kids who, like Bo, have “superpowers.”

At Berkshire, Bo falls in love with Sofia, a quiet girl with a tragic past and the superpower of invisibility. Sofia helps Bo open up in a way he never has before. In turn, Bo provides comfort to Sofia, who lost her mother and two sisters at a very young age.

But even the strength of their love isn’t enough to help Sofia escape her deep depression. After she commits suicide, Bo is convinced that she’s not actually dead. He believes that she’s stuck somewhere in time — that he somehow left her in the past, and now it’s his job to save her.

The really cool part about the Literary YA box is that the author actually includes handwritten annotations throughout their book. 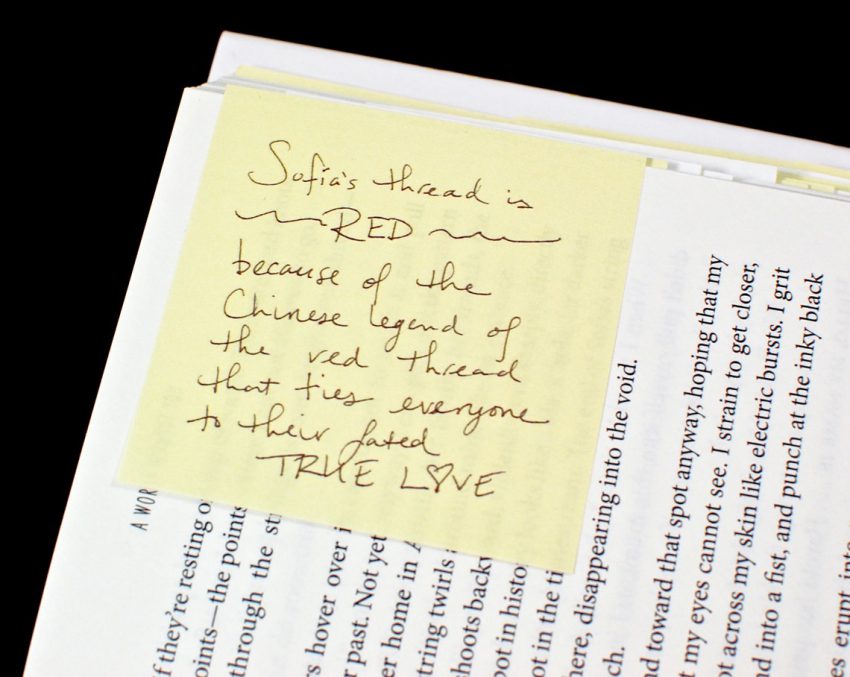 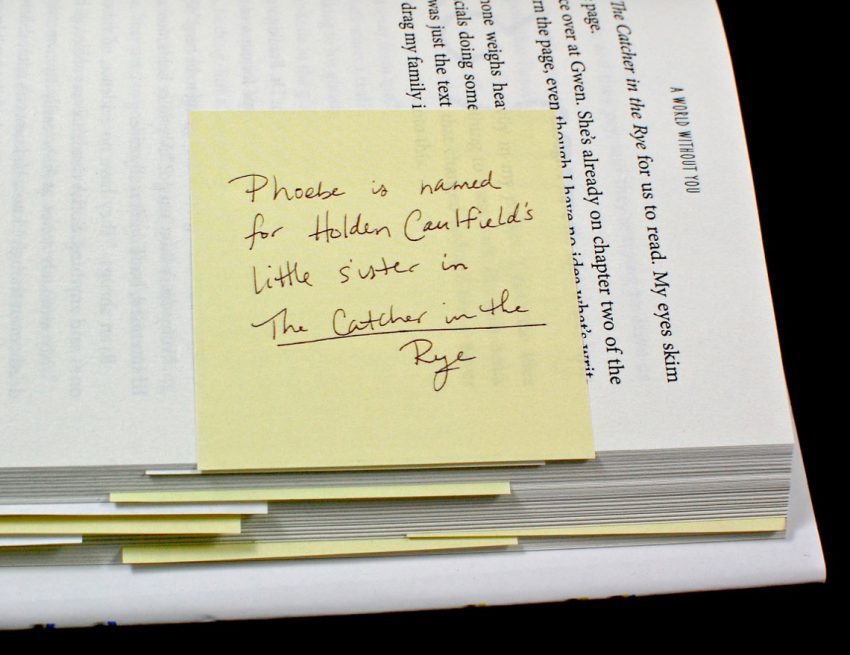 I haven’t started reading the book yet, but I’m sure all of these little tid-bits will make it all the more interesting. 🙂 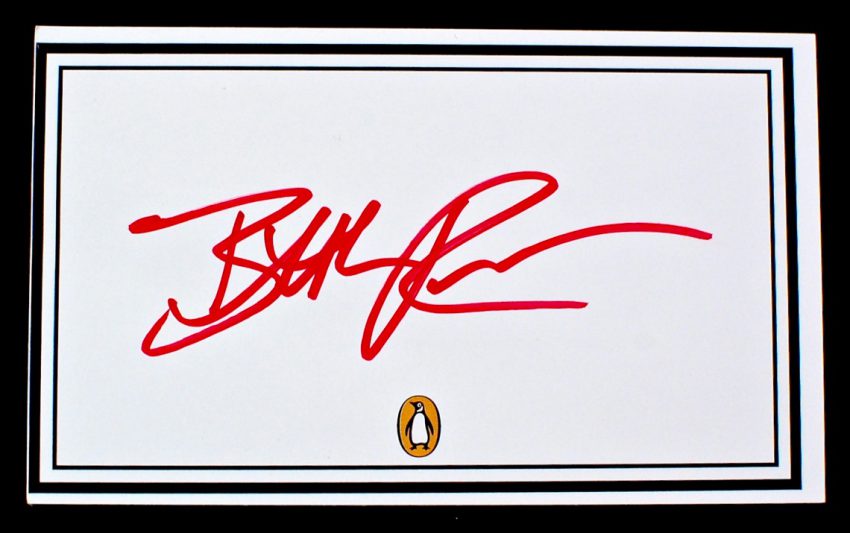 The book also came with an autographed bookplate from Revis herself. 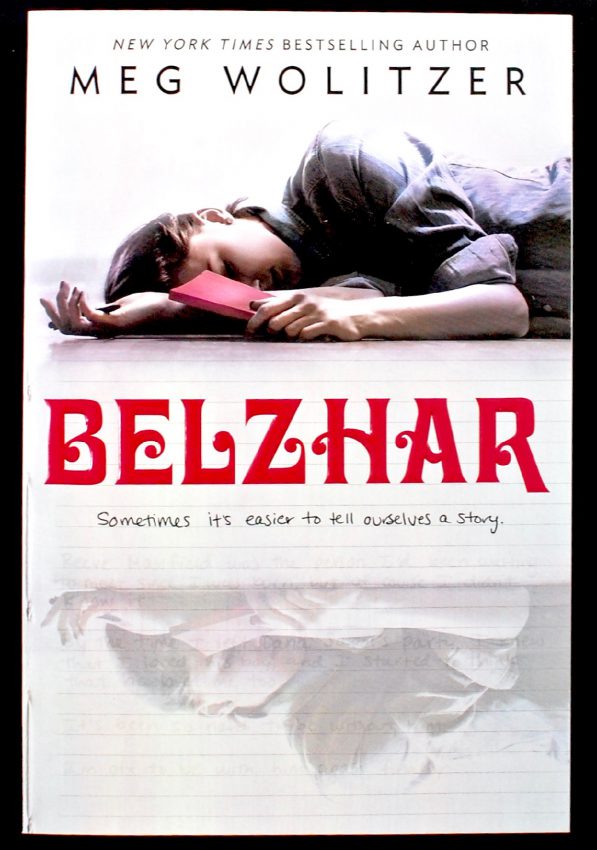 Belzhar by Meg Wolitzer – Revis chose this title because she wanted to find other books that “push the boundary of what’s real”.

If life were fair, Jam Gallahue would still be at home in New Jersey with her sweet British boyfriend, Reeve Maxfield. She’d be watching old comedy sketches with him. She’d be kissing him in the library stacks. She certainly wouldn’t be at The Wooden Barn, a therapeutic boarding school in rural Vermont, living with a weird roommate, and signed up for an exclusive, mysterious class called Special Topics in English.But life isn’t fair, and Reeve Maxfield is dead. Until a journal-writing assignment leads Jam to Belzhar, where the untainted past is restored, and Jam can feel Reeve’s arms around her once again. But there are hidden truths on Jam’s path to reclaim her loss. 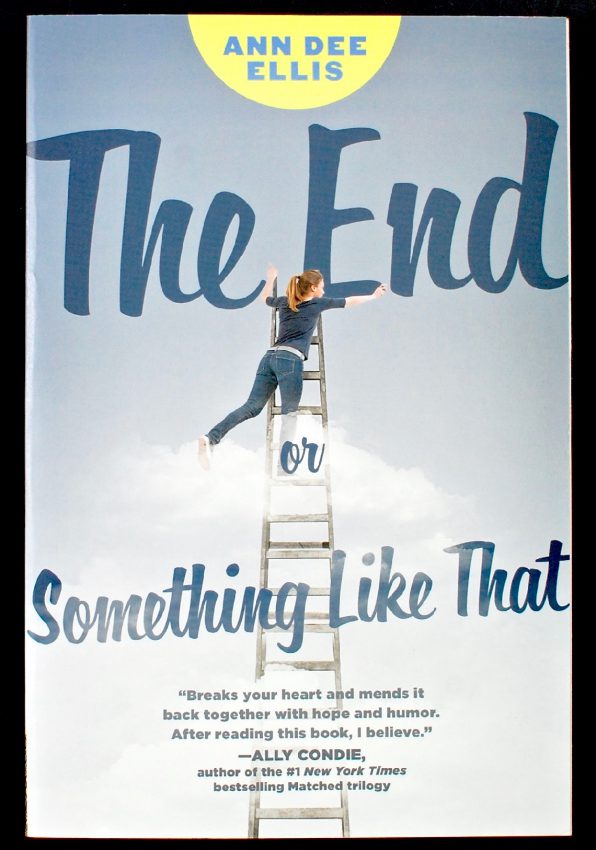 The End or Something Like That by Ann Dee Ellis – Another title that questions reality, this book uses humor as a tool to help cope with loss.

Emmy’s best friend Kim had promised to visit from the afterlife after she died. But so far Kim hasn’t shown up even once. Emmy blames herself for not believing hard enough. Finally, as the one-year anniversary of Kim’s death approaches, Emmy is visited by a ghost—but it’s not Kim. It’s Emmy’s awful dead science teacher.

Emmy can’t help but think that she’s failed at being a true friend. But as more ghosts appear, she starts to realize that she’s not alone in her pain. Kim would have wanted her to move forward—and to do that, Emmy needs to start letting go. 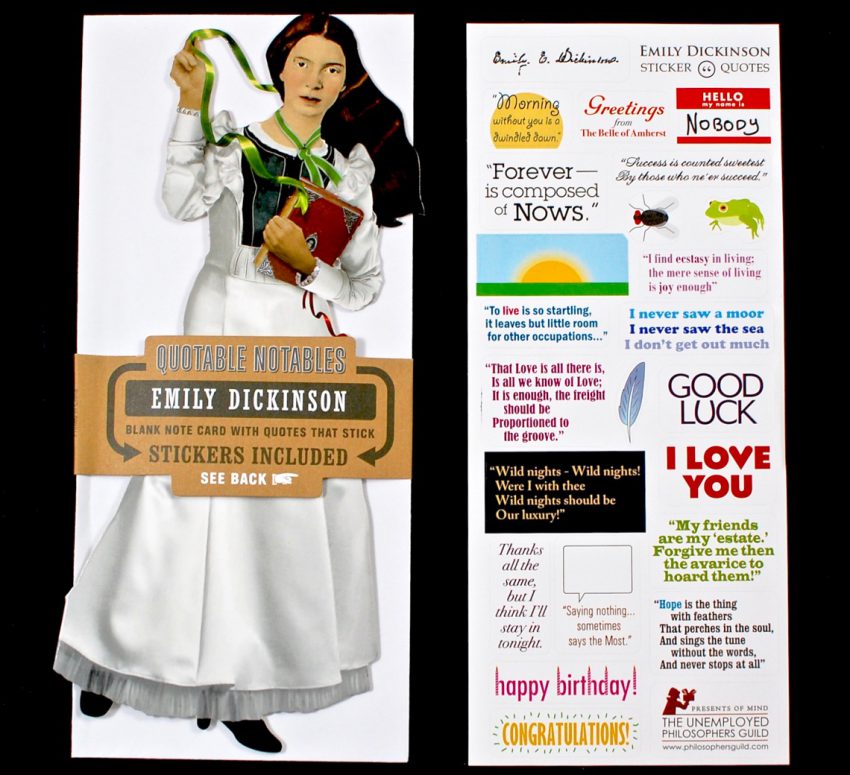 Quotable Notables Emily Dickinson Note Card – Revis chose this blank card to challenge subscribers to write a note to someone they love. She wanted it to serve as a reminder that they’re not alone. The card features a die cut full-body image of Emily Dickinson, along with a sheet of Dickinson-related quote stickers. 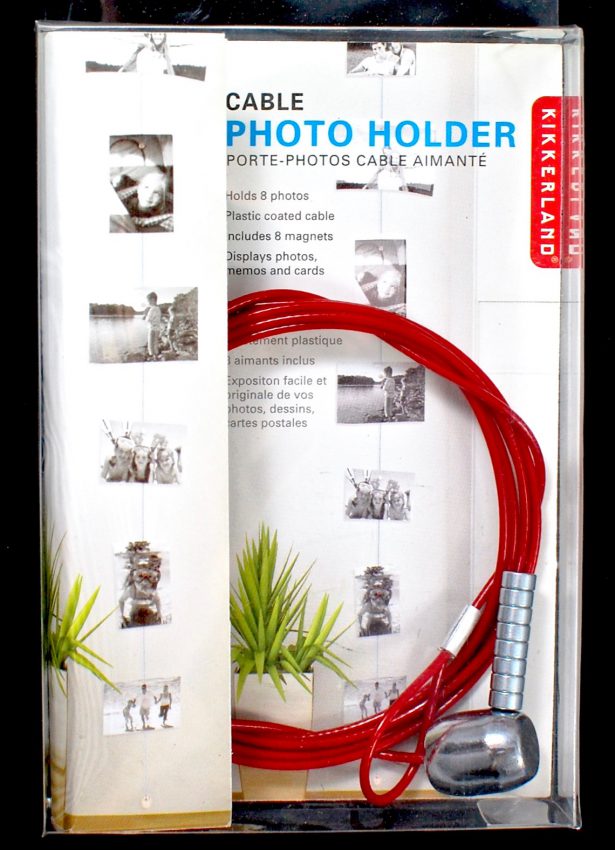 Kikkerland Cable Photo Holder – The thread that ties the main character in A World Without You to the girl he loves is red… Revis chose this red cable photo holder so you can fill it with images of those you love and remind yourself that you’re connected to people who care about you. The eight included magnets can be attached to the weighted high strength steel cable to hold your photos/images in place. I think I’ll be using this to display my girls’ artwork that they bring home from preschool. 🙂

I was very impressed with this offering from Quarterly’s Literary Young Adult box! I loved how it felt more like a personal care package from a friend than your standard subscription box. It was nice to receive three books, along with personally selected items that tied into the theme. 🙂

Here’s your chance to win a FREE July 2016 Quarterly Co. Literary YA box (a $50 value)!
Just enter via the form below. Good luck!

A fun box for fans of young adult books! The personal curation is clearly the highlight of this subscription. The letter from the author, annotation notes, and specially chosen products really make the box something special. 🙂

Disclosure: I received this box for review purposes. I was not compensated in any way. All opinions are my own. Post may contain affiliate links. Giveaway open to US residents only, 18+. Prize fulfillment to be handled directly by Quarterly Co. Winner will have 48 hours to respond to confirmation email and claim their prize. If I don’t get a reply, a new winner will be chosen.