Girls Can! Crate is a monthly subscription box that inspires girls ages 5-10 to believe they can be and do anything by introducing them to fearless women who made the world better.

Each box will include a 20-page activity book telling the featured woman’s unique story (as well as games, experiments, & more), 2-3 hands-on STEAM (science, technology, engineering, art, and math) activities related to her field, a creative play prop, a featured character trait that helped her succeed and 2-3 practical tips for parents to easily foster that trait, and more. The boxes are designed to encourage a love for STEAM, to foster creativity, curiosity, and support literacy development. With every box purchased, Girls Can! Crate donates 10% of the proceeds to nonprofit organizations working to empower women and girls.

Subscriptions are $29.95/month or less with multi-month commitments. Shipping is free within the US. 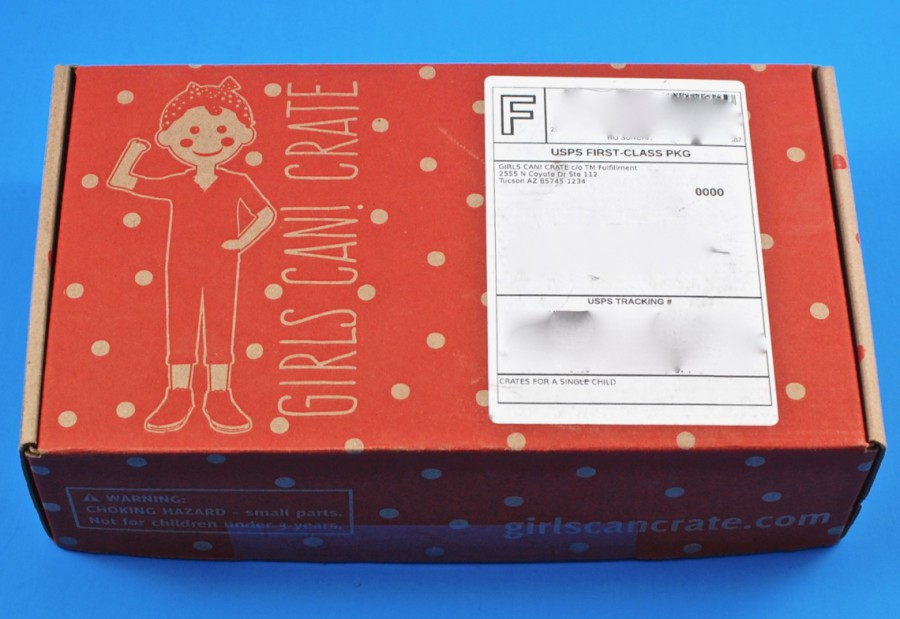 Everything was shipped in a bright red box with the Girls Can! Crate logo on top. 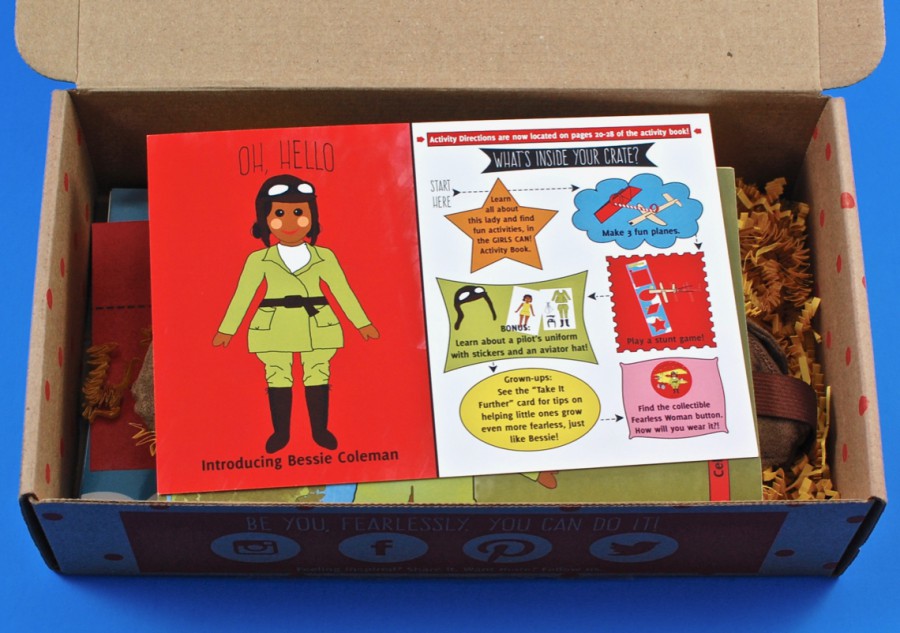 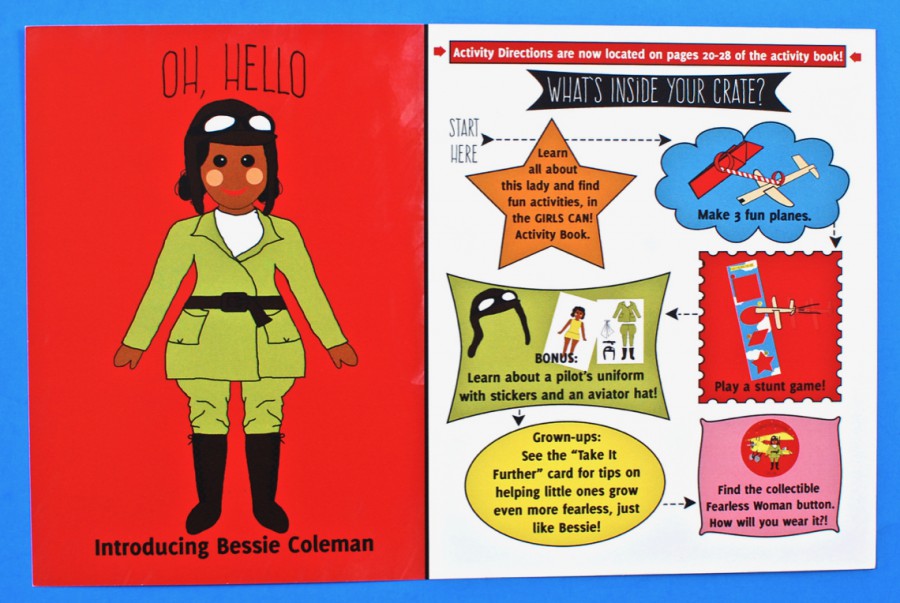 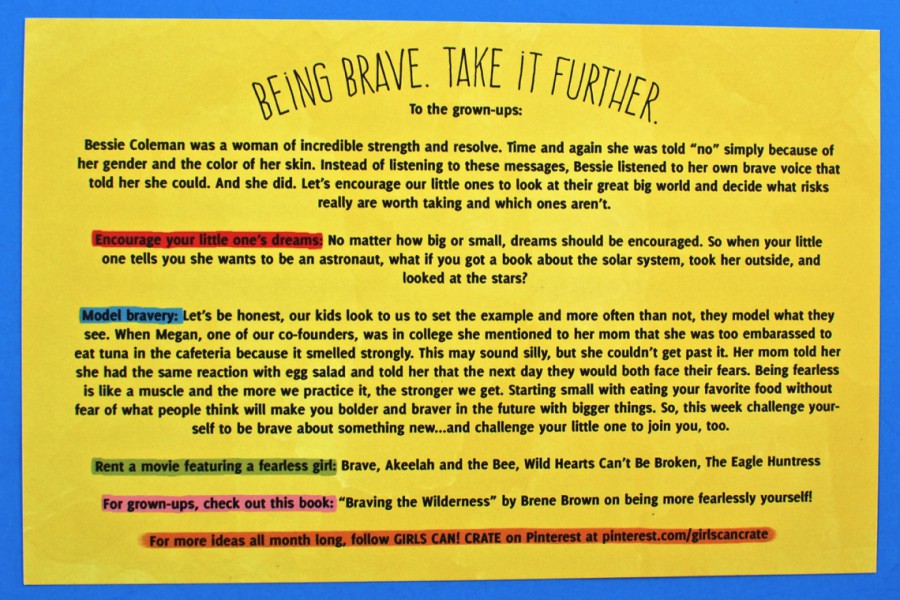 February’s featured “fearless woman” was the brave aviator, Bessie Coleman. An information card listed all of the activities in the crate and the order in which they should be completed. The reverse side included tips for parents on how to encourage Bessie’s bravery in their own children. 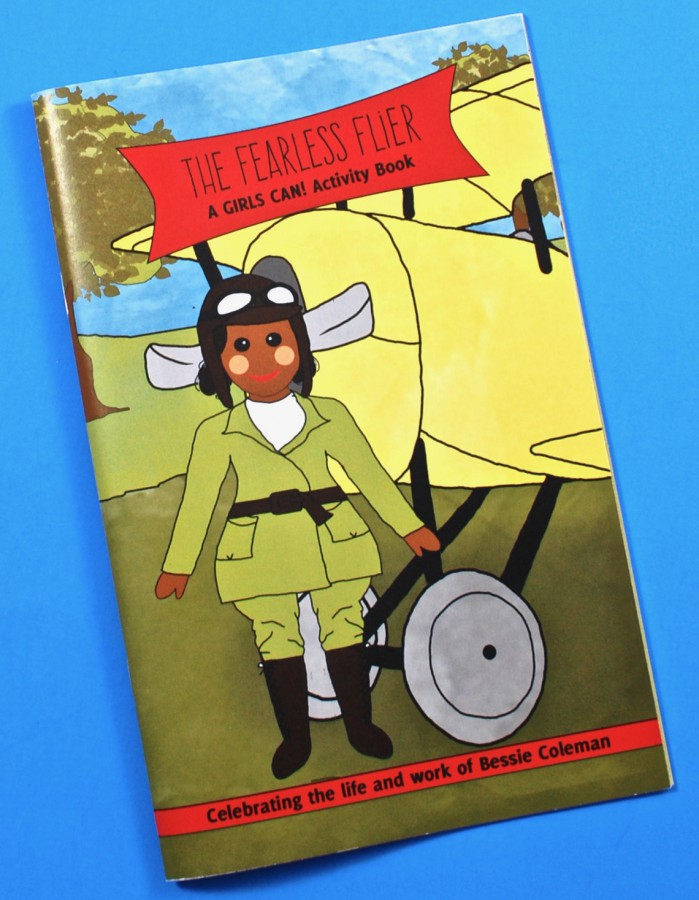 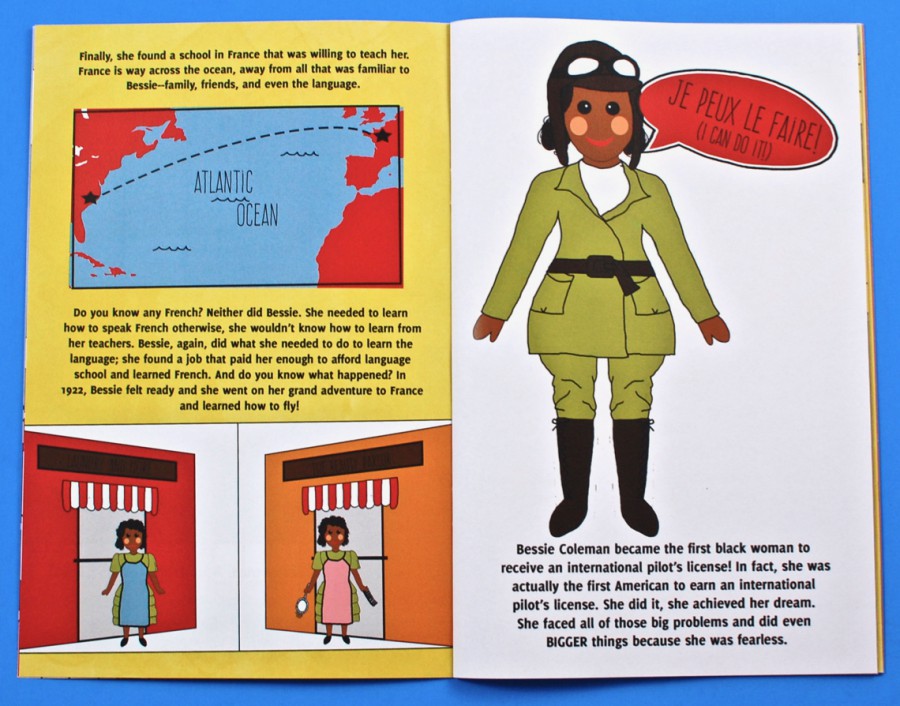 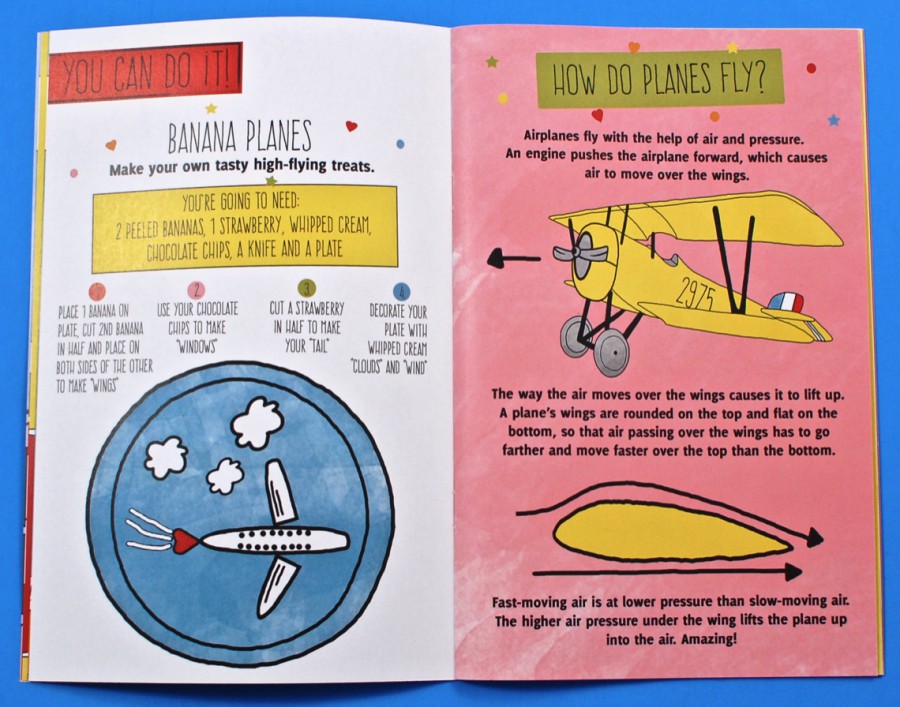 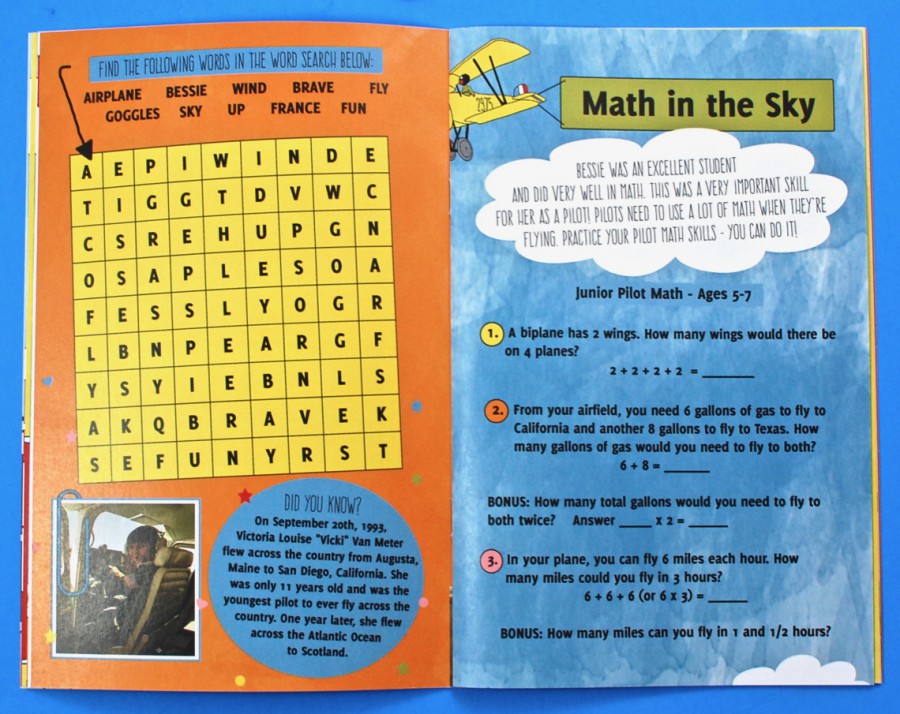 A 20-page, full color activity book included the story of Bessie Coleman and how she overcame many obstacles to become the first American to earn an international pilot’s license. It also included puzzles, games, snack ideas, and more. All of the activity instructions were printed in the booklet as well. 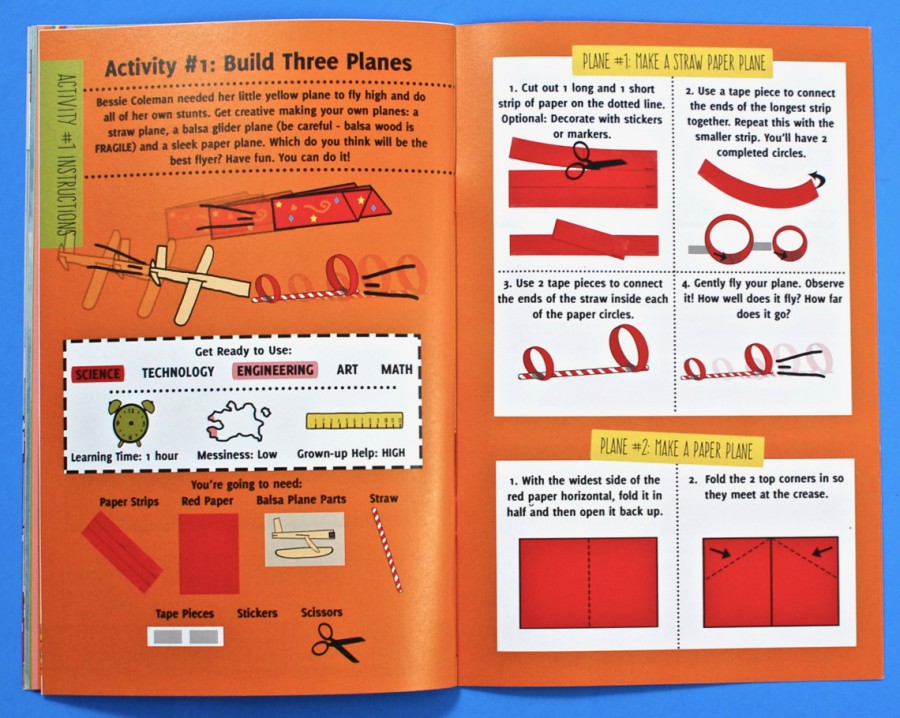 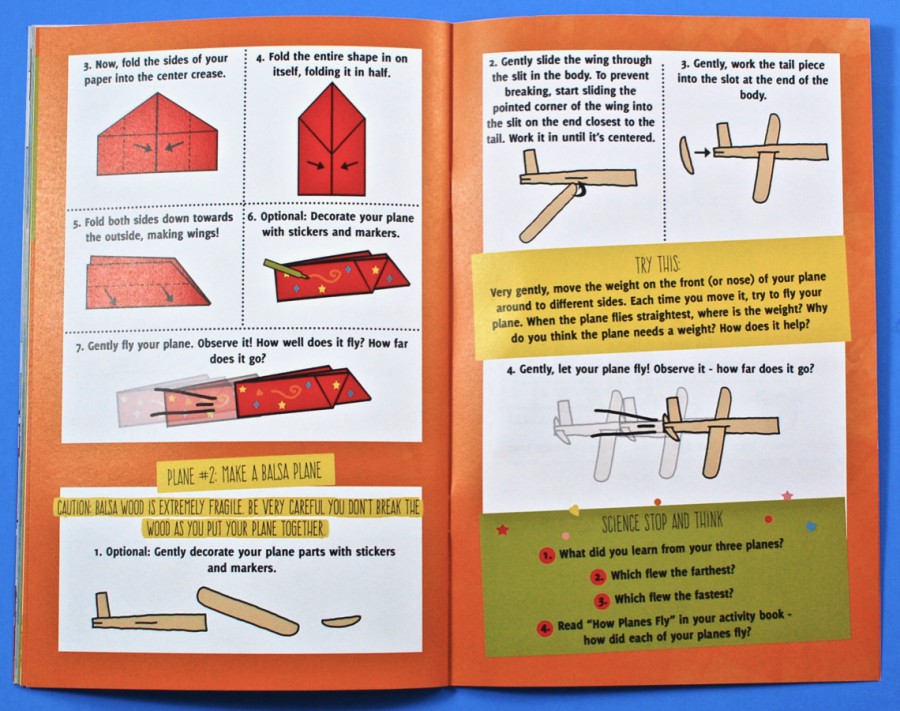 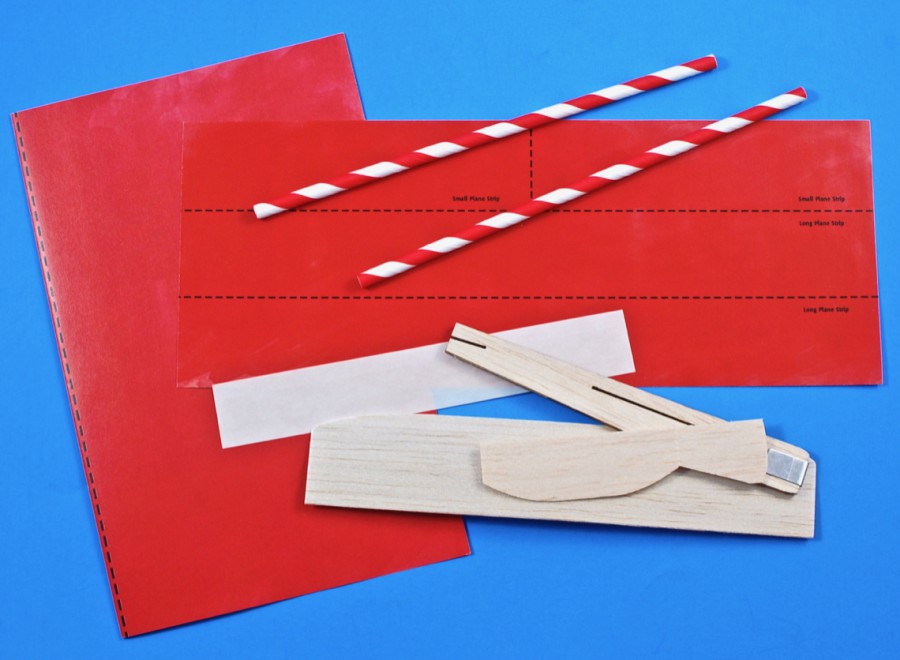 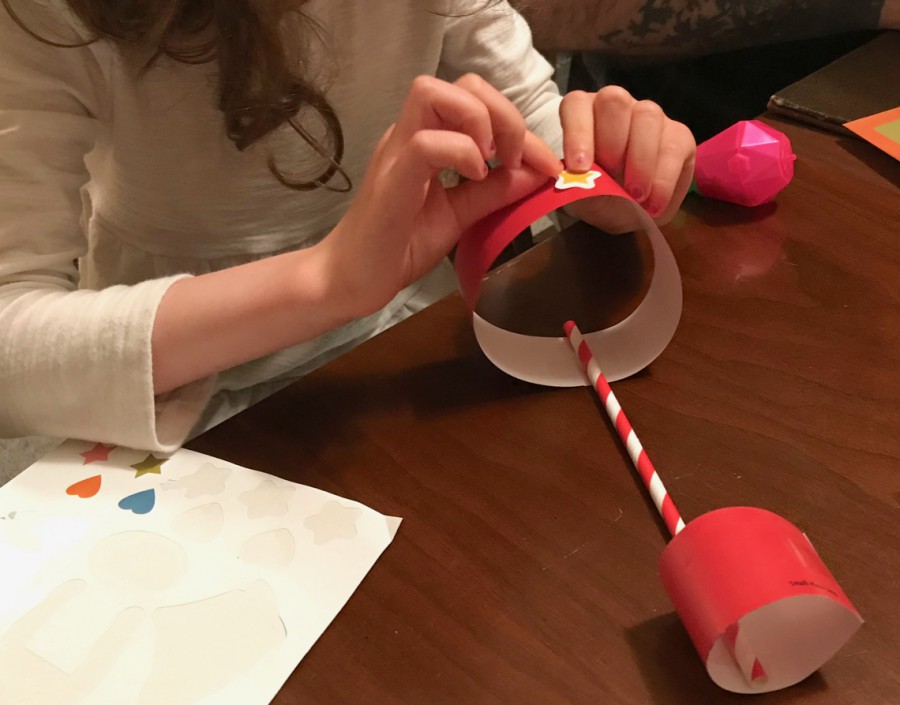 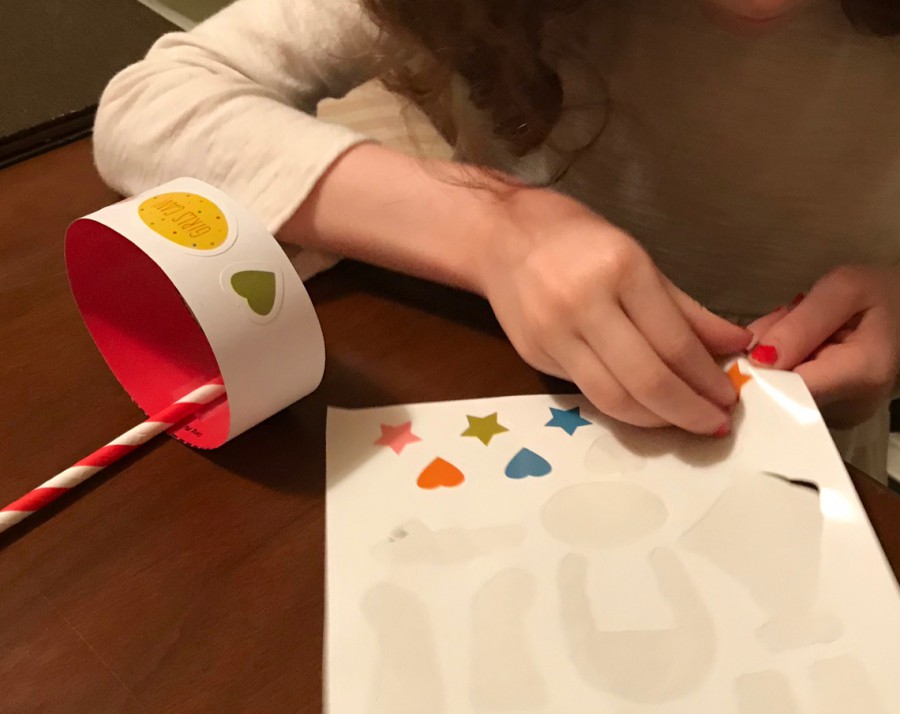 Decorating the completed straw planes with the stickers provided. I had never made/flown this type of plane before and was a little skeptical of its ability to fly, but it worked surprisingly well! 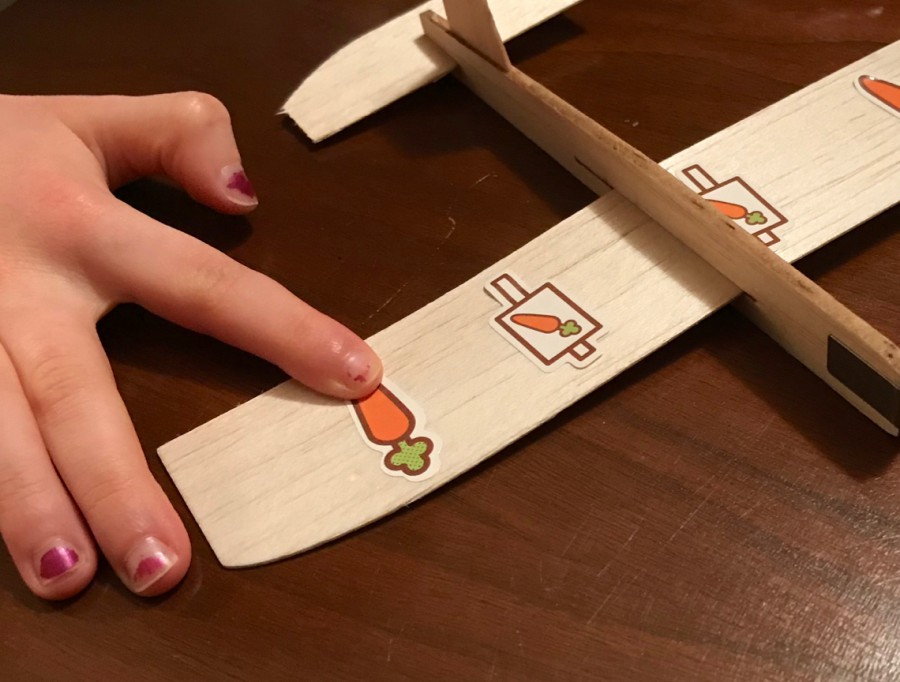 The girls decided to use their own stickers to decorate the balsa wood plane, but they didn’t stick very well. Markers probably would have been a better way to go, had I have actually thought about it at the time. Ah well. 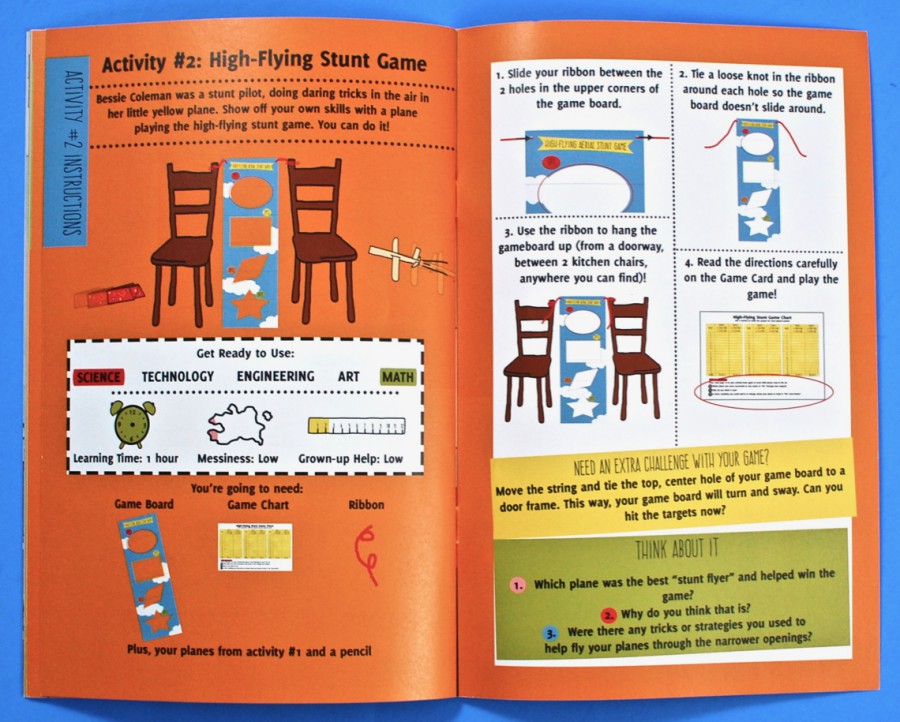 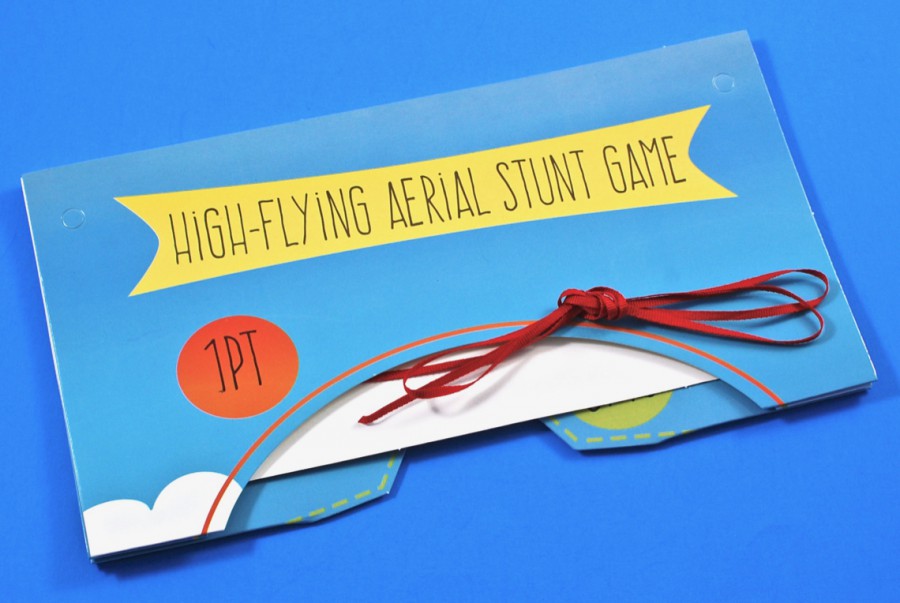 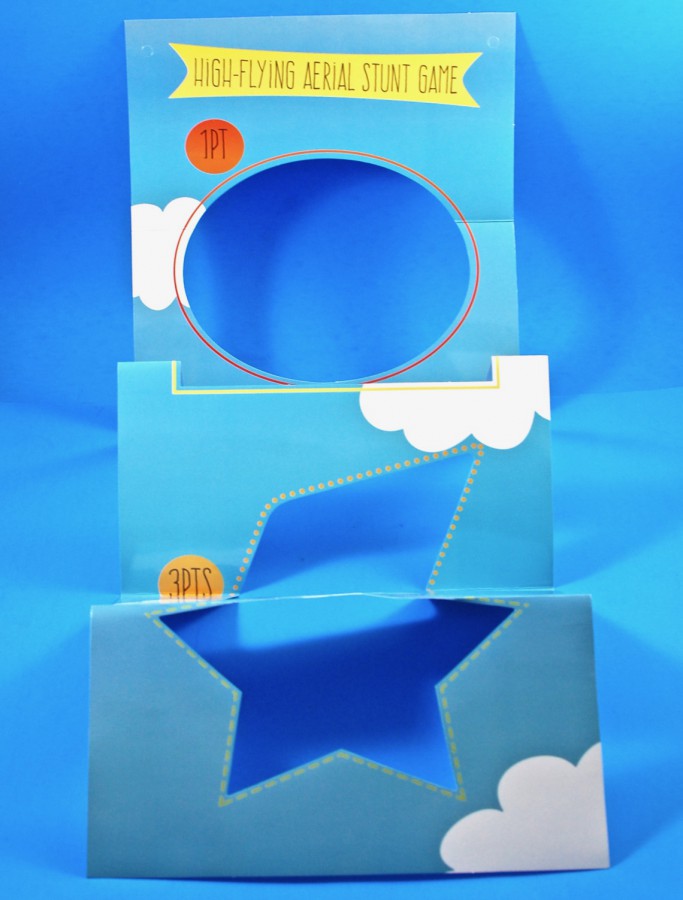 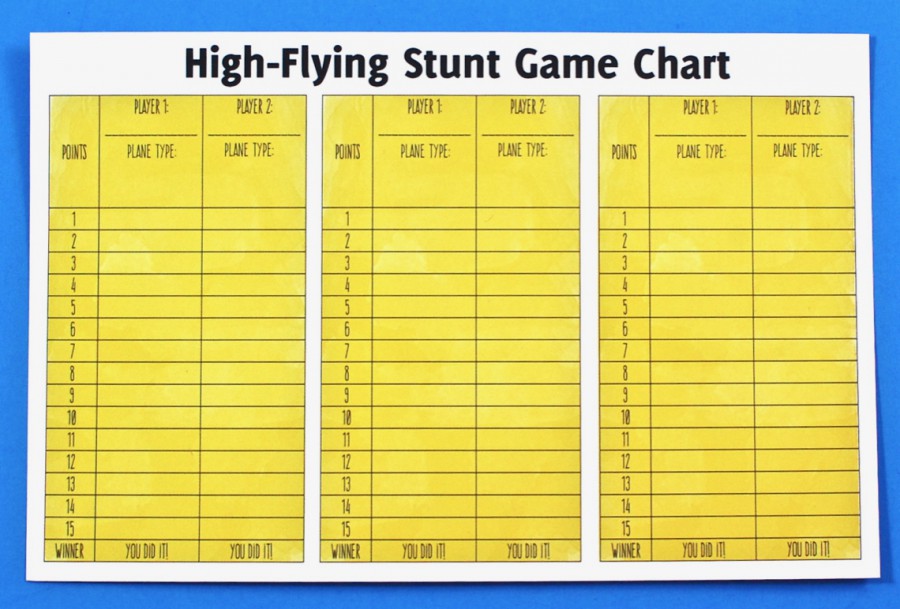 The second activity had us using our newly made planes to play a stunt game. A large “game board” was to be strung with the included ribbon and hung from a doorway. The activity booklet mentioned following the rules printed on the game chart above, but as you can see, there weren’t any there. That said, we just decided to wing it (see what I did there? 😉 ) and fly our planes without any rules. 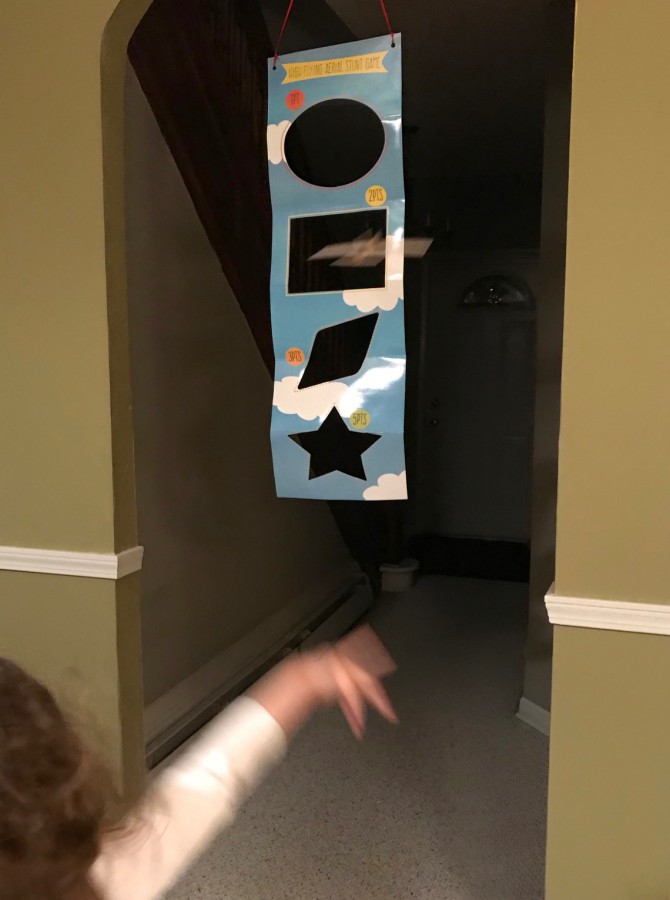 Blurry action shot! — You can see the (blurred) balsa wood plane zipping through the rectangle. Score! 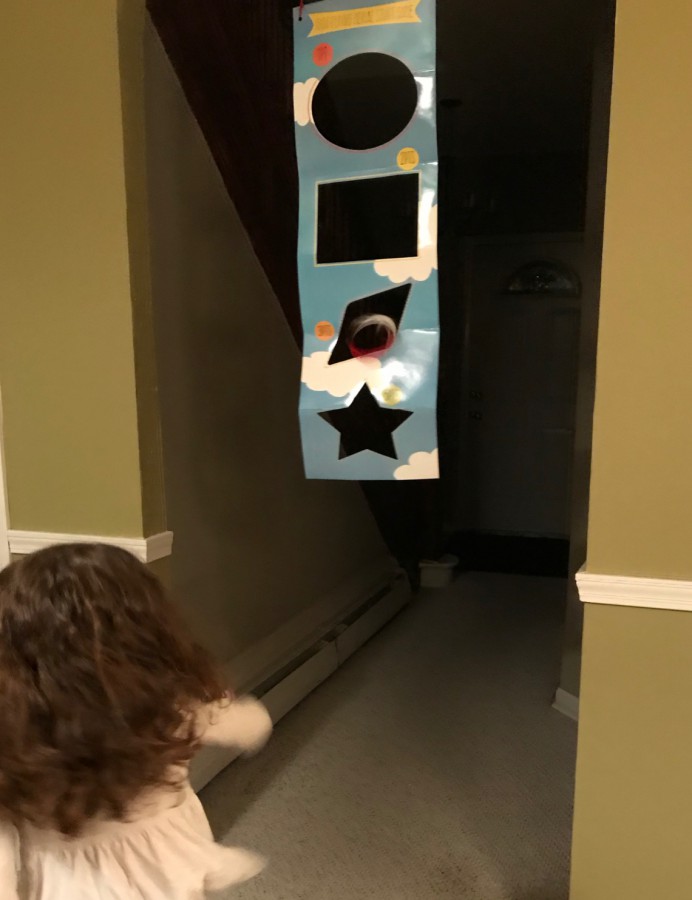 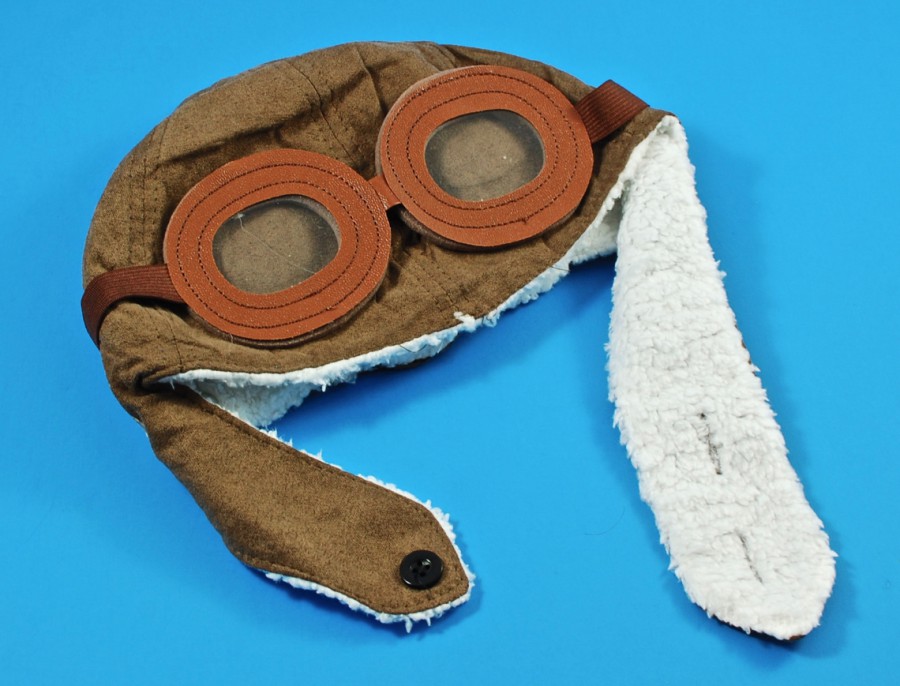 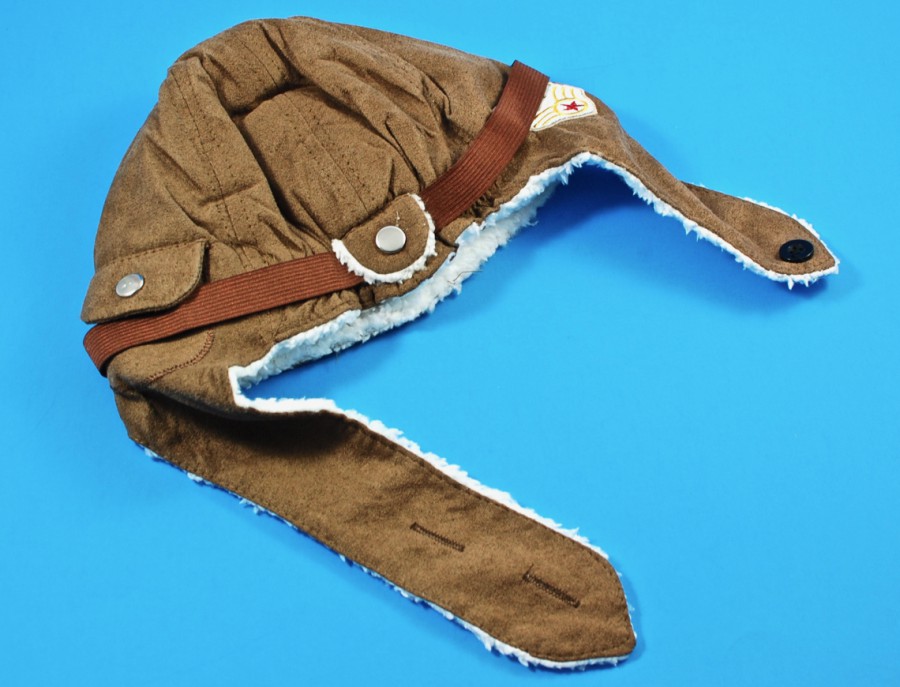 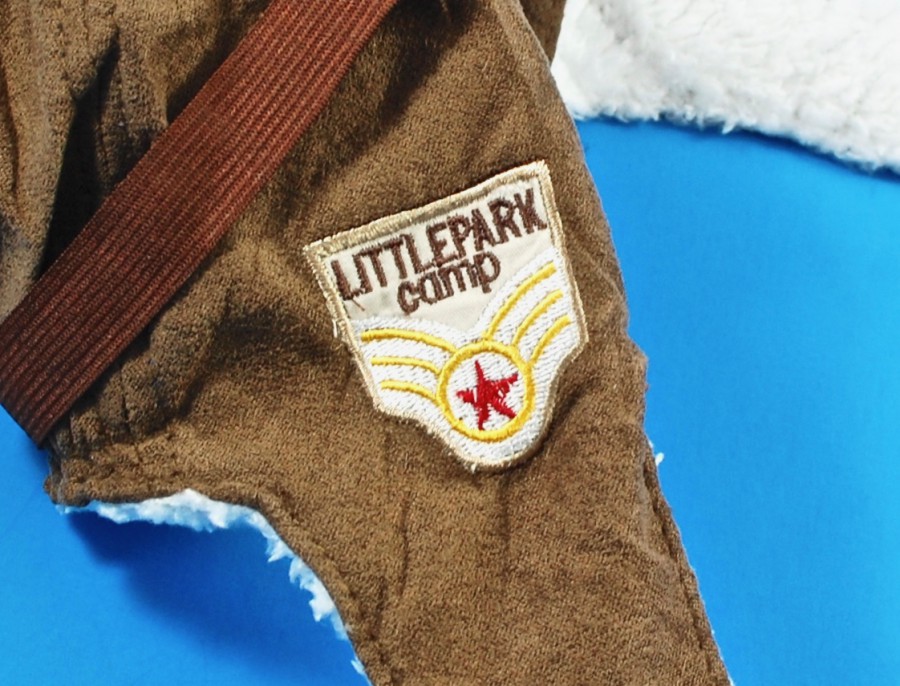 The activity book included details on the type of uniform pilots wore in Bessie’s days and what each of its components were for. In order to help kids look the part themselves, the box included an awesome aviator hat featuring a soft plush interior, movable goggles, a button closure under the chin, and an embroidered patch on the side. 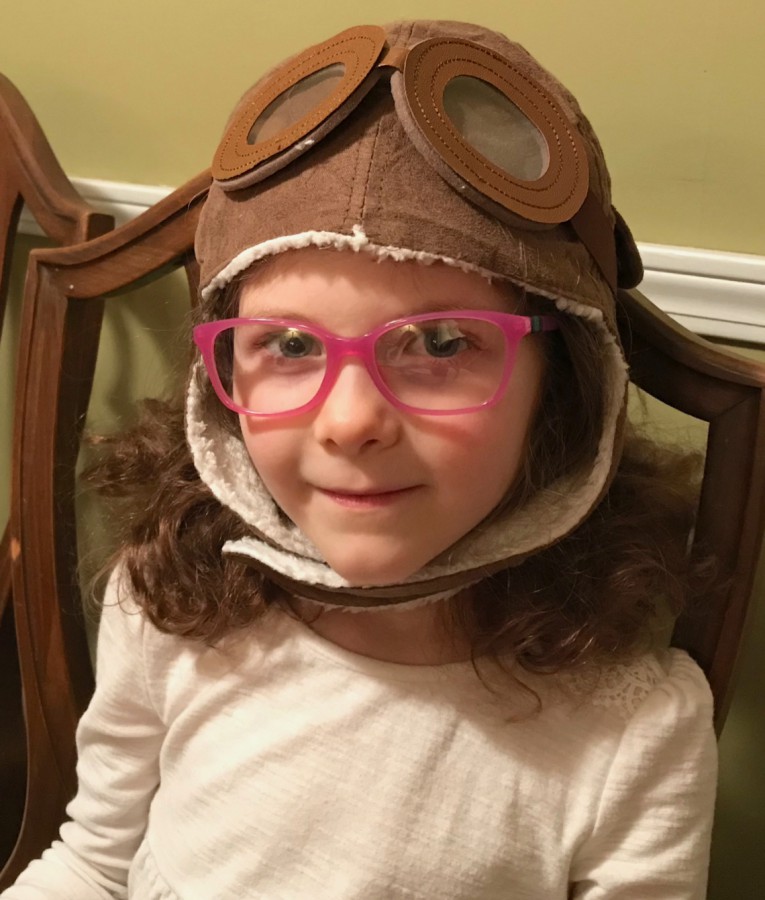 She kept making silly faces, so this is her “okay, now I’m not making a silly face” face. — Also, I CAN’T look at her and not see that kid (Flick?) from A Christmas Story. Ha! 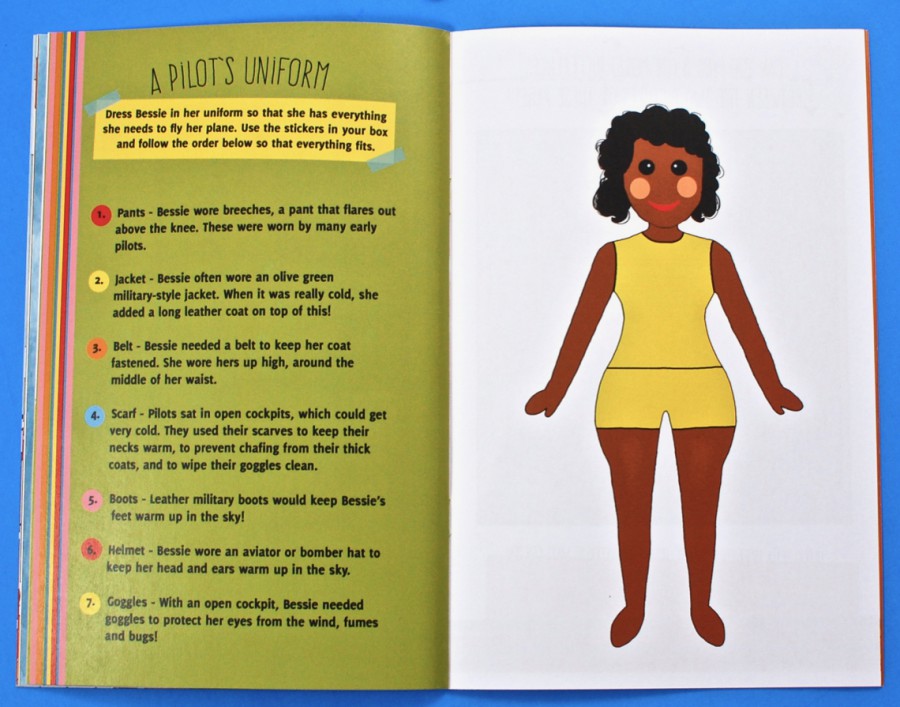 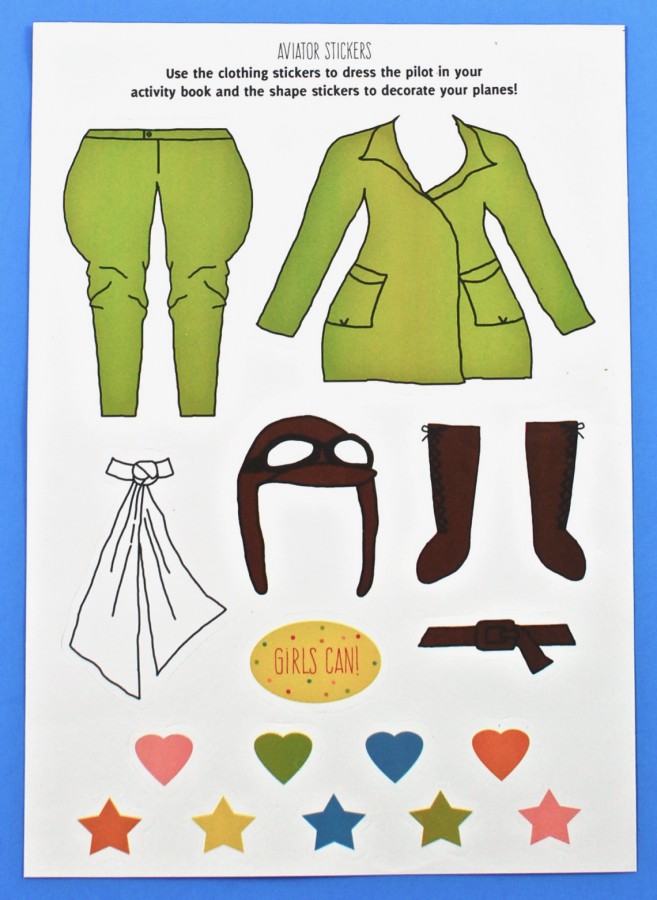 Learning about the uniform also involved us dressing Bessie in her proper attire using the sticker sheet above. (The heart and star stickers were used to decorate the planes earlier.) 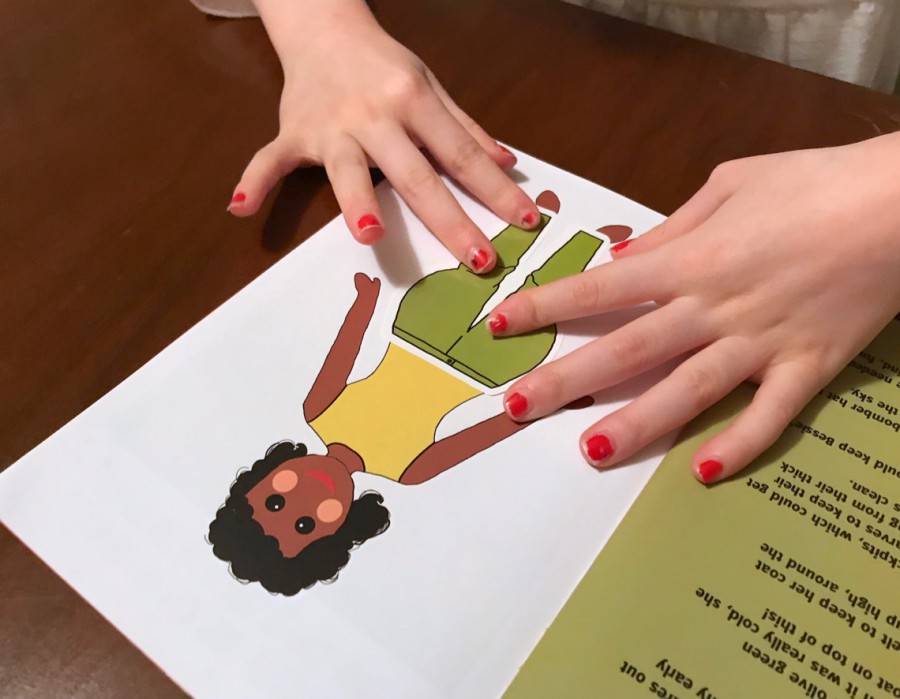 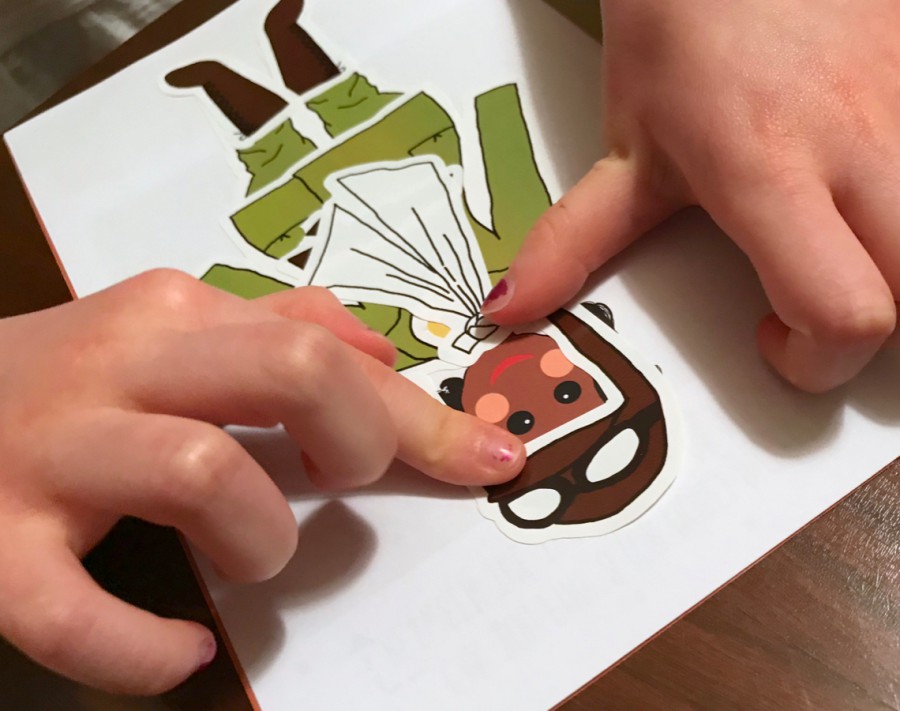 Helmet & goggles last… Bessie is dressed and ready to fly! 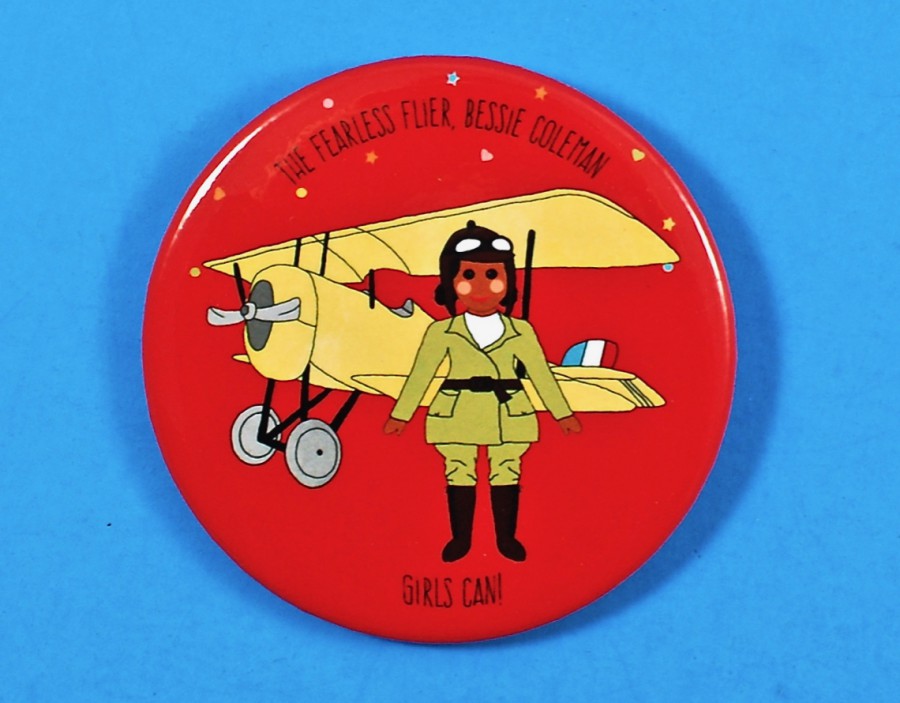 Once all of the activities were complete, we had officially earned our Bessie Coleman collectible button. 🙂

February’s Girls Can! Crate introduced my girls to a courageous woman who followed her dream of flying during a time when it was especially difficult for a woman and an African American to achieve such a bold endeavor. — Such a great inspiration for young girls! We had fun making our own planes and pretending to be brave pilots just like Bessie. 🙂

Another fun offering from Girls Can! Crate that taught us about the great determination of pilot Bessie Coleman and all of the challenges she had to overcome to achieve her dream. 🙂